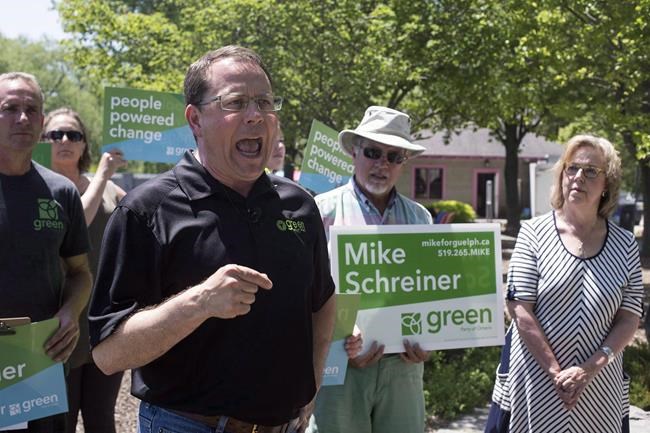 TORONTO — A speck of green appeared on a map otherwise dominated by orange and blue Thursday night as Mike Schreiner made history by winning his Green party's first-ever seat in the Ontario legislature.

The American-born politician handily won in his Guelph riding with 45 per cent of the vote, ushering in what he hopes is a new era for his party.

"If we look at the success of Green parties in other provinces, it always starts with one leader being elected," he said, pointing to British Columbia and Prince Edward Island as examples.

"When people see elected Greens in action, they see that we do politics differently ...they want to elect more Greens."

In the 2014 election, Schreiner, who's led the provincial Greens since 2009, finished third, just 1.5 percentage points behind the Progressive Conservative candidate, who was not running this time, and ahead of the NDP.

The incumbent, prominent Liberal Liz Sandals, also did not run.

While Schreiner has won this initial fight, he noted that he may face an uphill battle for the next four years as he contends with a Progressive Conservative majority government that has vowed to eliminate Ontario's cap-and-trade system.

In his victory speech in Guelph, Schreiner had a message for Doug Ford: "You believed that climate change was real, and people were causing it," he told supporters. "And so you better listen to the Green MPP from Guelph about how we solve the climate crisis."

"Well first of all, I'm going to talk about just how important it is to embrace the clean economy," he said. "I think Guelph is leading in that and I want my community to continue in job creation in a clean economy — that's where growth is globally."

He noted that Guelph will be his priority once he gets to Toronto — his former home.

Schreiner was born and raised in a farm in Kansas, but he moved north in 1994 to Canada when his wife became a professor at the University of Toronto. He moved to Guelph a few years ago after working in the southwestern Ontario city for years.

"This is literally people-powered change," he said following his win. "We've had over 500 volunteers working on this campaign. They're just passionate, they're committed and they want to create a more liveable future for our children and grandchildren."