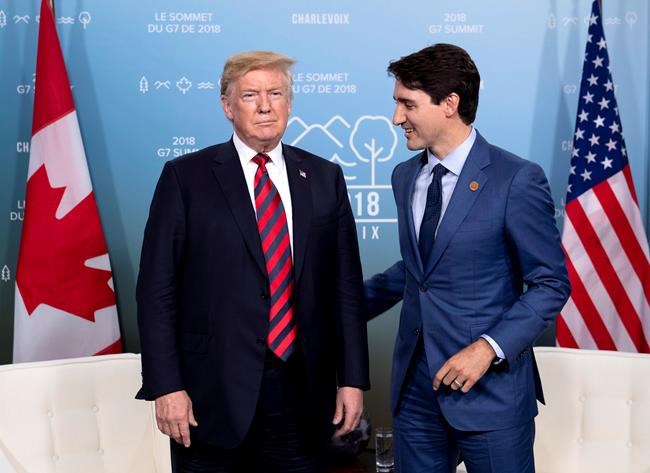 OTTAWA — U.S. President Donald Trump's Twitter tirade against Prime Minister Justin Trudeau following the G7 is sparking promises of support from some of Trudeau's political rivals as well as calls for calm from foreign diplomats and experts.

Trudeau has declined to comment on Trump calling him "dishonest and weak," which several of the president's closest advisers have said was a response to comments the prime minister made at the end of the G7 meeting in the Charlevoix region of Quebec this weekend.

In her own tweet, Green Party leader Elizabeth May says Trudeau is handling what she calls Trump's outbursts and bullying as well as anyone, and that all Canadian leaders need to support the prime minister.

Ontario premier-designate Doug Ford is also among those setting aside his political differences with Trudeau, re-asserting today that he stands "shoulder to shoulder" with the prime minister on trade.

Internationally, one European diplomat says the rest of the G7 will carry on despite the president's online attack against Trudeau and his decision to pull out of the final G7 communique.

Former Canadian ambassador to the U.S. Derek Burney is among those urging Canada and others to stay calm, adding that he hopes Trump's latest antics will see members of Congress and others in the U.S. follow Senator John McCain's lead and rally in support of Canada and the G7.