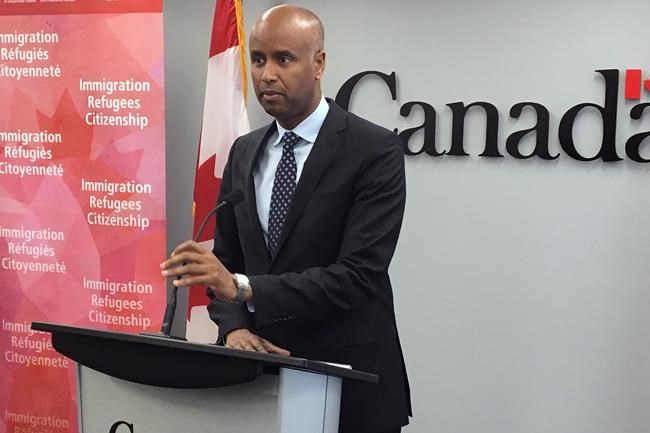 Last week, a spokesman for Premier Doug Ford used the term in a statement sent to the media, saying the recent influx of asylum seekers has resulted in a housing crisis in Toronto and "threats to services that Ontario families depend on."

On Monday, an emailed statement sent to The Canadian Press from Ford's office repeated the "illegal border crossers" terminology.

"I'm very concerned by Premier Ford and (provincial) minister (Lisa) MacLeod really making statements that are difficult to understand when it comes to how they're describing asylum seekers," Hussen told reporters in Halifax.

"These are people who we have a legal obligation to give a fair hearing to, and so we're applying Canadian law, we're applying international law and that requires all levels of government to work together."

The act of crossing the border at a point other than an official port of entry is illegal. However, according to the federal Customs Act, those seeking asylum in Canada have that right to do so under the United Nations 1951 Refugee Convention.

Hussen addressed the issue of language as he took questions from reporters about Ontario's call for additional financial help from Ottawa to deal with asylum seekers in Toronto.

Between the beginning of January and the end of May 2018, the Canada Border Services Agency and Immigration and Refugees and Citizenship Canada have processed more than 20,000 asylum claimants, according to federal data.

There were 3,304 refugee claimants in the Toronto shelter system as of late June, accounting for close to half of its users.

Fifty-four bedroom dormitories at Centennial College in Toronto are being used as temporary homes for 344 asylum seekers, and hundreds more are being housed at another student residence.

The asylum seekers are expected to be out of the residences by Aug. 9, as the colleges prepare for the return of the student population.

Hussen said he was "perplexed" by the request for more money at a time when the province isn't co-operating with efforts to redirect people to temporary shelters outside of large centres.

He noted that Ottawa has allocated $50 million,  $11 million of which is earmarked for Ontario, to assist with temporary housing for the asylum seekers.

"What we're saying is to relieve the pressure from Toronto and Montreal, we need the provinces to be on board to put together a triage plan that takes asylum seekers away from those major cities," he said.

Hussen used the phrase "irregular border crossing between ports of entry" to describe the asylum seekers.

"When someone crosses our border, it's an illegal act. But once they're on Canadian soil and they claim asylum, the charge of crossing irregularly is stayed pending the determination of their asylum claim," he said.

Still, Jefferies said the federal government is the one distorting the English language.

"It is disturbing that the federal government is deliberately confusing legitimate refugees with illegal border crossers. Frankly, they know better," he wrote.

Several Ontario service providers who assist refugee claimants also objected to Ford's language, saying they're fearful about the impact it may have on Ontarians' opinions towards immigrants.

"We know from experience that whenever any population is demonized or belittled, it affects public opinion," said Debbie Douglas, executive director of the Ontario Council of Agencies Serving Immigrants.

Debbie Hill-Corrigan, executive director of Sojourn House in Toronto, said the notion that all refugees are illegal and use up public services, "pits (Canadians) against refugees."

She said the shelter takes in refugees, mostly youth, from Syria, Saudi Arabia and multiple African countries who are part of the LGBTQ community and fear for their safety.

Hill-Corrigan said she's concerned the shelter might lose funding from the province's Newcomer Settlement program in light of Ford's comments, as well as Toronto Mayor John Tory's statement that the city would have to close community centres and cancel public programs because of the refugees.

"We hope that Ontarians will continue to be pro-immigration and continue to extend an helping hand in terms of our humanitarian obligations," said Douglas.

— With files from Gabriele Roy and Alanna Rizza in Toronto.