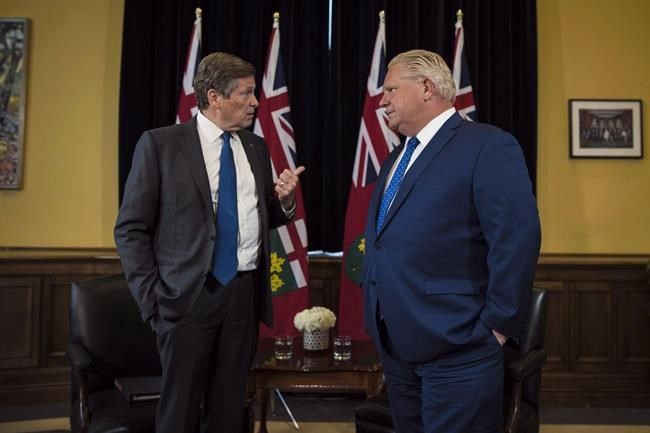 Doug Ford says his Progressive Conservative government will introduce legislation to cut the number of seats from 47 to 25, aligning city wards with federal ridings.

Ford, a failed Toronto mayoral candidate and single-term city councillor, said he has wanted to make the change since his days at city hall.

"I promised to reduce the size and cost of government and end their culture of waste and mismanagement in government," he said. "This is something I fought for at City Hall, something I continue to believe in today."

Having fewer city councillors "will dramatically improve the decision-making process," and save Toronto taxpayers $25 million over four years, Ford said.

Asked why he didn't campaign on the plan during Ontario's spring election or hold public consultations on it, Ford said he heard from thousands of people while canvassing that they want a smaller government.

"There isn't too many people that I know that wouldn't want to trade in a bunch of politicians for $25 million," Ford said. "People don't care about politicians, they care about getting things done."

The deadline for candidates to register for the municipal election was Friday afternoon but the province said it will extend that to September.

Ford's move was pre-emptively panned by Toronto Mayor John Tory, who told reporters earlier Friday morning that the process around the plan is "absolutely not right." The mayor said he'll propose a referendum on the issue.

"This is a gigantic decision about the future of Toronto," Tory said. "What we don't need and what I just can't support is change being rammed down our throats without a single second of public consultation."

Calling Ford's plan "an affront to our democracy," Coun. Kristyn Wong-Tam urged the mayor to challenge it in the courts.

"I think the mayor needs to defend our city and our democracy and that's what I'm looking for from him," she said.

"If you reduce councillors to 25, all of a sudden you lose that connection with the electorate and in the end the public is the loser, and they're going to feel it right away," he said.

Others, however, expressed support for a smaller municipal government, arguing it would cut costs and help council reach decisions faster.

"The only thing we do upstairs in that chamber is everybody gets up and just wants to talk," said Coun. Jim Karygiannis. "When you have 25 people there's more cohesion, you'll move faster on things. That's why I'm supportive of this."

Former Ontario Progressive Conservative leader Patrick Brown, whose resignation this winter paved the way for Ford to take over the party, is running for the Peel seat, while former Liberal cabinet minister Steven Del Duca is a candidate in York.

Ontario's Liberal caucus panned the decision, calling it "gravely concerning," and called on the Ford government to reverse its decision.

"This is a highly undemocratic proposal," it said. "The Ford government is unilaterally ramming through a last-minute, massive change to Ontario's electoral map."

Mitchell Kosny, associate director of Ryerson University's school of urban and regional planning, said Ford's move will create havoc within Toronto's municipal government as it grapples with the changes.

"I think it throws everything into disarray," he said. "It takes (over) the city for the next two or three months, and takes all of the energy and changes all of the priorities and issues it was working on. I think this will now be the singular focus."

Kosny said the decision has parallels to former Tory premier Mike Harris' forced amalgamation two decades ago that created the City of Toronto as it's now constituted.

"One day they announced we were going to amalgamate," he said. "That didn't come from any research, any study, it wasn't on any political platform. I think the only study that was ever done on it was post-decision."

And while Ford has said he believes people will support the move, Kosny pointed to the opposition to amalgamation in the Harris era as evidence that may not be the case.

"I think that did galvanize a lot of people," he said. "I actually think this does resonate with people on the street. I'm not sure everyone understands what it will mean. But when you take things away from people it always rises ire."

— with files from Alanna Rizza.