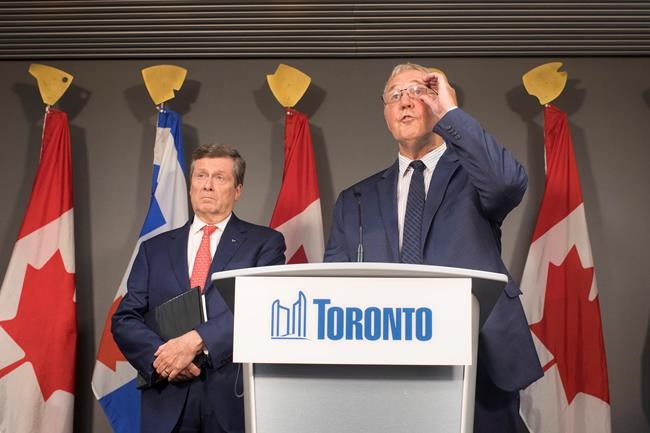 OTTAWA — Canada is willing to consider any possible measures that might reduce gun violence and organized crime, but will stay the course when it comes to border security, says the federal minister who's now overseeing the Liberal government's approach to all three.

Bill Blair is acknowledging that the latest rash of shootings — most recently in Toronto — has touched off a sense of urgency among the public for the government to do more to keep deadly firearms out of the wrong hands.

"This is a significant concern for Canadians," Blair told The Canadian Press in an interview.

"The concern that currently exists in places like Toronto, Surrey, B.C., and other parts of Canada requires that we examine the issue and deal with it in a comprehensive way."

The former Toronto police chief, elected to the House of Commons for the first time in October 2015, earned his first senior cabinet post last month after helping to stickhandle the controversial Liberal cannabis bill between three separate departments to its ultimate approval earlier this year.

Prime Minister Justin Trudeau has now tasked Blair with conducting a "deep analysis" across government to examine what additional steps could be taken to tackle the scourge of gun violence — a subject with which the veteran of the Toronto police is intimately familiar.

"Because I've got decades of experience, the prime minister has asked me to provide that focus for our government, to look at every aspect in every ministry so that we address all of the issues related to gun violence and that will enable us to take effective action in addressing it," he said.

The government's work will include looking at "any measure which will be effective," he added.

Last month, two people were killed and 13 others were injured after a gunman, who also died, opened fire on one of Toronto's busiest streets — just the latest in a number of deadly shootings this year. In response, Toronto city council passed a motion urging the federal government allow the city to forbid the sale of handguns in the city and for the province to outlaw the sale of handgun ammunition within city limits.

Ontario Premier Doug Ford announced $25 million in new funding Thursday to combat gun violence in Toronto, but said he would not support a proposed ban on handgun sales.

The federal government has already said it would consider a number of different ways to crack down further on handguns, including empowering municipalities to do so — a commitment Blair reiterated this week.

"We are quite prepared to look at how — in certain parts of the country perhaps — greater restrictions might be implemented. But in addition to that, you have to recognize that in and of itself is not the sole solution," Blair said.

Blair said he believes many of the current rules are working as they should. He also noted he knows many responsible firearm owners who follow all the rules.

"At the same time, I think we all share a concern when those firearms get into the hands of violent criminals who are prepared to commit violent acts in our communities and we need to do everything we can do keep those guns out of their hands."

Meanwhile, other aspects of the former cop's newly minted and wide-ranging cabinet post are raising concerns.

Advocacy groups that work with refugees sent a letter to Trudeau calling a cabinet portfolio that includes both border security and organized crime a "toxic combination" that conflates the two issues and could fan fears and xenophobia against refugees seeking asylum in Canada.

Blair's portfolio "inescapably risks feeding the very dangerous narrative that people who are fleeing for their lives are breaking the law and even threatening our security," reads the letter, signed by officials from Amnesty International, the International Civil Liberties Monitoring Group and the Canadian Council for Refugees, among others.

"We urge you to clarify the reasons for combining these disparate mandates and to endeavour to assure the public that the government does not in any way consider irregular migration in and of itself to be a criminal matter or a security threat."

Blair dismissed the idea that his portfolio risks criminalizing border crossers, saying he has simply been tasked to manage a number of complex files where there are intersections between ministries.

"We have to make sure that, however people come into the country, there is no risk of criminality or national security... but it's within a broader portfolio," he said.

"I am not in any way connecting asylum seekers to criminality, but we are talking about maintaining the integrity of our borders, which includes ensuring that the rules are upheld and the law is followed."