Trudeau: no apologies for heckler encounter, pledges to call out ‘hate speech’

By Teresa Wright and Terry Pedwell, The Canadian Press — Aug 20 2018 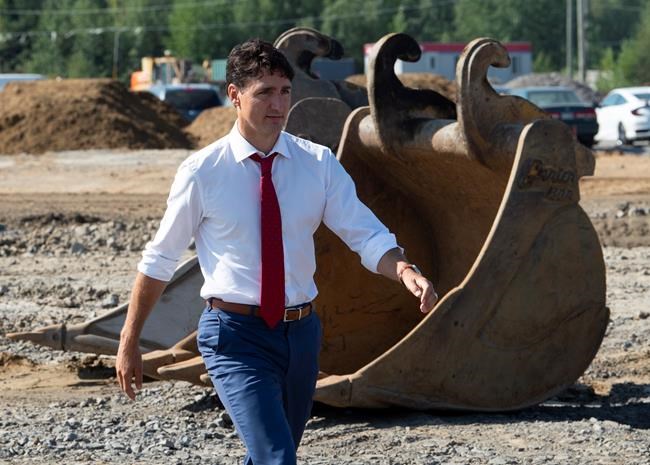 OTTAWA — Hate speech and the politics of division are creating a "dangerous path" for Canada, Prime Minister Justin Trudeau said Monday as he vowed to steer clear of such roads and to continue calling out those who rely on "extremist" methods to make their voices heard.

Trudeau made the comments when asked whether he went too far in accusing a Quebec woman of racism and intolerance as she heckled him last week during a rally in Quebec.

During a campaign-style rally Thursday southeast of Montreal, the woman shouted questions in French at Trudeau, asking him when the federal government would repay Quebec for costs it has incurred as a result of an influx of "illegal immigrants" coming over the Canada-U.S. border.

The Quebec government has demanded Ottawa pay the full costs of social services provided to so-called irregular migrants who have crossed into Canada between established border crossings over the past couple of years — costs the province says have reached $146 million so far.

The prime minister responded to the woman by accusing her of intolerance and racism and saying her sentiments were not welcome.

At a groundbreaking ceremony Monday for a new Amazon distribution warehouse east of Ottawa, Trudeau said he fears a rise in extreme populism, particularly surrounding immigration issues, with some feeding fear and intolerance using partial truths and "outright lies."

"There has been a polarization in our political discourse," Trudeau said as construction machinery clattered in the background.

"And there are people who are trying to feed fears and intolerance for a broad range of reasons. ... I will remain positive and remain pulling people together, pulling communities together right across this country."

"This is a calculated Liberal strategy to avoid being accountable for their record," Scheer said in a statement Monday evening. "Instead of demonizing critics, Justin Trudeau should confront the problem."

Ontario's minister responsible for immigration, Lisa MacLeod, was on hand Monday for Trudeau's news conference. It's the prime minister who is creating divisions by shouting "racism" at those who question his government's immigration policies, she said.

"I think when the prime minister, when confronted with some of the problems his government has created, turns around and fearmongers and calls people un-Canadian or racist, (he) really debases the debate that we're having."

Ontario's new Conservative government has also called on the federal government to foot the bill for services provided to asylum seekers, which that province has tallied at $200 million and climbing.

A woman who identified herself on social media as a member of the right-wing group Storm Alliance took responsibility for the confrontation with Trudeau in a post on Facebook. The group has been behind protests denouncing the arrival of asylum seekers at an irregular border crossing near St-Bernard-de-Lacolle.

"Pretty happy that I participated in him blowing a gasket," the post says.

The federal government has so far offered a total of $50 million to Ontario, Quebec and Manitoba to offset expenses incurred as a result of a spike in asylum seekers entering the country by way of unofficial entry points along the Canada-U.S. border. Of that sum, Quebec — where the bulk of the crossings have taken place — would receive $36 million.

Quebec Premier Philippe Couillard said he hopes to persuade people that diversity is good for the province.

"If someone tells me they are worried about diversity, I will accept this worry exists and I will try to explain my point of view, that it (diversity) is something that can be very positive for our society," Couillard told reporters Monday.

The issue of irregular border crossings could become a wedge issue in the campaign leading up to the next federal election scheduled for the fall of 2019.

At an event Sunday marking Trudeau's formal nomination to run for re-election in the Montreal riding of Papineau, Trudeau emphasized the fight against extremist populism as a plank in his party's 2019 platform, and accused Scheer of exploiting fear and division.

— With files from Mylene Crete and Caroline Plante

Note to readers: This is a corrected story. An earlier version said the confrontation with Trudeau occurred Sunday.