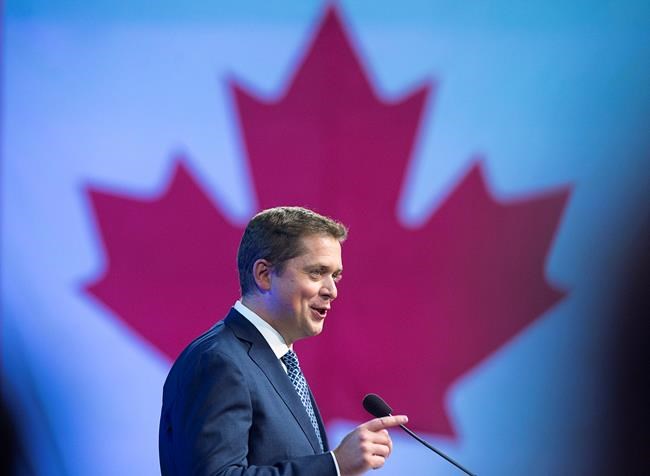 Tories who attended the biennial convention in Halifax passed a new party policy, which is non-binding, that calls for the government to enact legislation to end birthright citizenship in Canada "unless one of the parents of the child born in Canada is a Canadian citizen or permanent resident of Canada."

Critics on social media accused the Conservatives of supporting a policy that could lead to stateless children, prompting Scheer to issue a statement late Sunday saying that while the policy did not specifically target ending birth tourism, "ending birth tourism will be among the objectives of our policy."

Scheer said Conservatives recognize that there are many Canadians "who have been born in Canada by parents who have come here to stay" and who have contributed greatly.

"I will not end the core policy that facilitates this. Unlike Justin Trudeau, I will safeguard it against abuse," said Scheer.

Janet Dench, the executive director of Canadian Council for Refugees, says there is no meaningful data to suggest that "birth tourism" is an actual problem and that if the measure came into force, "the vast majority of people affected would not at all be people who come for birth tourism reasons."

Dench said the impact of the policy would go "way beyond" its intent if indeed the objective is in fact to combat birth tourism.

She said birth tourism presents newcomers as "people who are trying to take advantage of Canada and of Canadians. And that is a very dangerous way to be presenting non-Canadians and people who want to join our society."

Dench said the policy would result in stateless children being born in Canada. More broadly, she said, it would change the very fabric of Canada's society.

Dench said it would impact many women who give birth in Canada while they are waiting for permanent residency status, refugee claimants, and others in limbo.

Scheer's spokesman, Brock Harrison, did not respond to requests for more information in time for publication.

Alex Neve, secretary general of Amnesty International Canada, said the country's commitment to granting citizenship to individuals born in Canada is long-established and in line with most countries throughout the Americas, including the United States.

"It conveys a strong message of inclusion and a commitment to diversity; and it helps guard against the risk of people being born stateless. There is no evidence that Canada faces a problem with so-called 'birth tourism' that would in any way justify making changes to Canadian citizenship laws," said Neve.

Immigration Minister Ahmed Hussen's office said the "birth on soil" principle has been enshrined in Canada's citizenship legislation since the introduction of the Canadian Citizenship Act in 1947.

This means that any children born in Canada, with the exception of children of diplomats, consular officers, or employees of foreign governments, are automatically granted citizenship.

Mathieu Genest, a spokesman for Hussen, said it's a "shame to see the Conservatives going back down the path established by the Harper Government, which seeks to strip away the citizenship of people who have only ever known Canada as a home."

Genest said Canada does not record statistics of whether a woman is pregnant when entering Canada.

Scheer pointed out that the policy passed by Conservative party members is not unlike a petition sponsored by a Liberal MP calling for the end of birth tourism in Canada.

Liberal MP Joe Peschisolido sponsored an e-petition that asks the government to state that it does not support birth tourism, to commit resources to determine the extent of the issue and to implement measures to end the practice.