Ford fights back against ruling striking down council-cutting plan 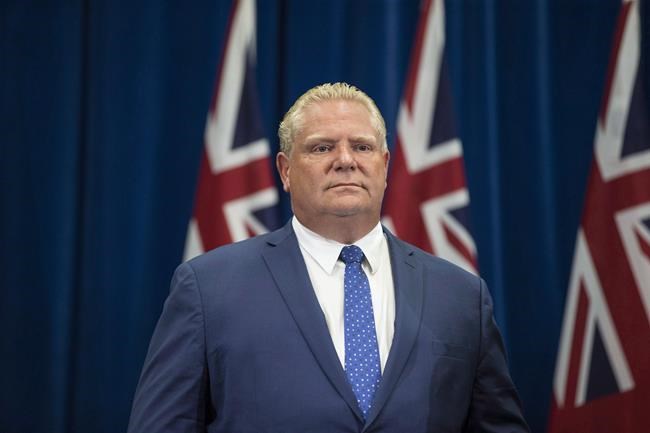 TORONTO — Ontario Premier Doug Ford took the unprecedented step Monday of invoking a rarely used charter provision known as the notwithstanding clause to push ahead with his plan to slash the size of Toronto's city council in the middle of an election, despite a court deeming the move unconstitutional.

Ford said his Progressive Conservative government would also appeal the judgment, which concluded the province's council-cutting legislation was hurriedly enacted and interfered with the right to freedom of expression for both candidates and voters.

"I believe the judge's decision is deeply, deeply concerning," Ford said hours after the scathing court ruling. "The result is unacceptable to the people of Ontario."

Ford's use of the notwithstanding clause, which gives provincial legislatures or Parliament the ability to override certain portions of the charter for a five-year term, drew swift condemnation from critics, who said the size of Toronto's city council was not the kind of issue the constitutional provision was designed to deal with.

The premier, whose government is facing other legal challenges on controversial moves such as the scrapping of a modernized sex-ed curriculum, said he "won't be shy" about using the notwithstanding clause — known as Section 33 of the charter — again in the future.

"My concern is democracy," the premier said. "What's extraordinary is a democratically elected government being tried to be shut down by the courts ... that should be concerning to every single person in Ontario."

Toronto Mayor John Tory called the use of the notwithstanding clause a "gross overreach" of the province's powers.

"To use an oversized hammer to abridge the Charter of Rights and Freedoms of our country, as if the matter of how many councillors we have for this election is some sort of national emergency involving the overriding of fundamental rights, is a mistake," he said.

Tory said the city will oppose an application expected from the province to stay the judge's decision pending an appeal. The mayor also said city staff will advise councillors at a special meeting on Thursday how the municipality can proceed with the upcoming Oct. 22 election.

"The options if you look at the plain wording appear to be extremely limited," he said. "It's an uphill struggle but that doesn't mean that something won't be found or that some advice won't be offered when we meet on Thursday."

In a tweet Monday night, Tory said he had met with Prime Minister Justin Trudeau, who was in Toronto for a women's summit, to discuss his concerns about the province's use of the notwithstanding clause.

"I appreciate his support for democratic principles, democratic institutions, and the importance of respecting cities," Tory said on Twitter.

Tory also has promised that if he is re-elected this fall he will try to take the issue to residents in a referendum.

In his ruling, Superior Court Justice Edward Belobaba found the province crossed the line when it rushed to enact the legislation — known as Bill 5 — in July without any consultation.

"There is no evidence that any other options or approaches were considered or that any consultation ever took place," Belobaba wrote. "It appears that Bill 5 was hurriedly enacted to take effect in the middle of the city’s election without much thought at all, more out of pique than principle. "

Bill 5 cuts the size of Toronto's city council from 47 seats to 25, aligning them with federal and provincial ridings. Ford, a failed Toronto mayoral candidate and single-term city councillor, argued the move will improve decision-making and save $25 million.

His plan wasn't mentioned during the province's spring election campaign or in the throne speech. But the premier said Monday that he was elected on a mandate of making the province more efficient.

McMaster University political science professor Greg Flynn said Ford's use of the notwithstanding clause is a "nuclear response" and will likely lead to more litigation.

"There has been limited use of the notwithstanding clause across Canada ... and usually on significant issues," he said. "This would seem to be relatively narrow but it would set a really dangerous precedent."

Constitutional lawyer Asher Honickman said any attempt to fight the legislation ought to be rooted in the law rather than political rhetoric.

"This is an unprecedented move, literally suspending the Charter rights of Ontario people in order to plow ahead with his revenge plot against his political enemies," she said. "A good leader doesn't just ask if he has the right to do it, but whether it's the right thing to do."

Ontario's Liberals called Ford's decision to invoke the notwithstanding clause unreasonable and said it would lead to "chaos and constitutional mayhem" in Ontario.

"This is a dangerous sign of what this government is willing to do," he said.

Ford said he'd be recalling the legislature this week to introduce legislation that will invoke the notwithstanding clause. Advance voting in Toronto's election starts on Oct. 10.

— with files from Michelle McQuigge.