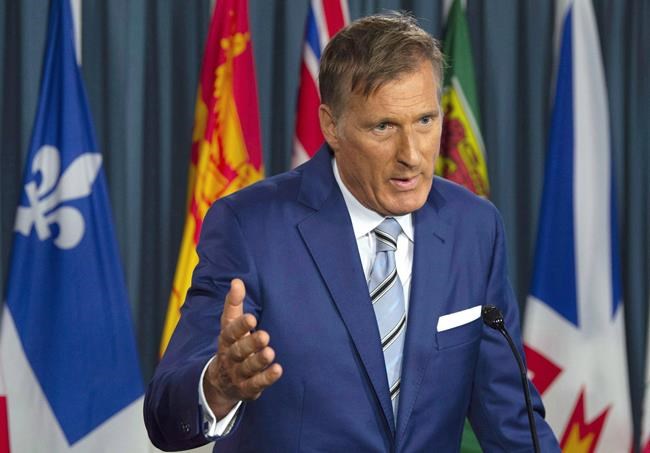 OTTAWA — Quebec MP Maxime Bernier says he will have no further discussions with the leader of the Canadian Nationalist Party.

Travis Patron, the leader of the far-right group, says he called Bernier's office last week because he wanted to "jump on the phone" with him to see if he could find out any details about his new political venture.

"I inquired with Mr. Bernier's office about his plans for his new party, trying to get some details about what his platform is and to see if there would be any interest in possibly co-operating with the Canadian Nationalist Party. So I reached out to him," he said.

Bernier organizer Martin Masse confirmed that the phone call took place, and said it would be the last.

The Canadian Nationalist Party is a fringe party that is not registered with Elections Canada. The group proposes banning burqas, and deporting asylum seekers. In a recent video Patron tells supporters that the party supports "traditional gender roles," and says, "We want our men being strong and we want our women being beautiful."

But their phone call, he said, focused primarily on immigration. Patron said they agreed that the Liberal government is not doing enough to curb the number of asylum seekers crossing the U.S. border into Canada. But Patron said he and Bernier disagreed on the number of newcomers to welcome to Canada, saying he would like number to be much lower than what Bernier proposed.

Patron said Bernier asked for his support and he responded that he was looking forward to learning more about his party. Bernier is expected to announce his party's name and logo on Friday and Patron said he hopes the party's name doesn't have "nationalist" or "nationalism" in it because it will overshadow his work.

Masse said Bernier "welcomes everyone in his party who shares the fundamental values and supports the clear policies he has put forward over the past years," adding, "That's what he tells everyone he meets and talks to who is interested in his new party. Those who don't share these fundamental values should support other parties.

"Mr. Bernier will have no further discussion with Mr. Patron," he said.

Bernier spent much of the last year butting heads with Conservative Leader Andrew Scheer over party policy on supply management, and announced last month he was leaving the Conservatives to start his own party. He has touted having several prominent people behind him, and now they are starting to come forward publicly.

Former Dragon's Den personality and merchant banker Michael Wekerle said he is impressed by Bernier because he is reliable.

"What he says is what he does is what he believes in. He's a politician yet he doesn't wade outside his core principles and for me, I thought that was very impressive," said Wekerle.

Bernier said he raised more than $90,000 in less than two weeks to support his new party. He hopes to have the signatures and other paperwork required to register the new party with Elections Canada later this fall, with a view to being prepared for the 2019 federal election.

Gurmant Grewal, a Conservative MP between 1997 and 2006, said while he played a key role in merging the Reform Party and the federal Progressive Conservative party, the new party has "lost touch" with grassroots members and is run by "inexperienced kids."

Bernier, said Grewal, is a grassroots member with good leadership qualities and vision. He said if Bernier asks him to run as a candidate, he will.

Grewal's political options may be limited. The Conservative party did not give him the green light to run in the 2015 federal election.

Prominent pot activist Marc Emery, another supporter of Bernier's leadership bid, said that he donated $1000 to Bernier's campaign and that he endorses everything Bernier says and does.

"I've never seen anything I disagree with," he said.

Emery acknowledged that creating a new party is a "herculean task" but he said Bernier has a massive database of people who supported his leadership bid and he wants to help his campaign.

"I don't even know if it has a name yet but I'm excited about it."