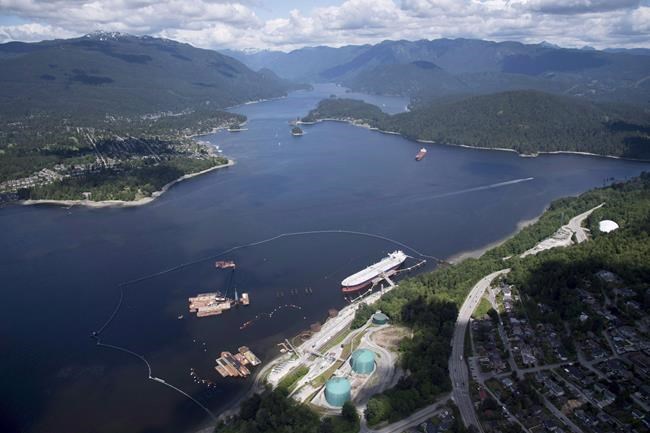 OTTAWA — Natural Resources Minister Amarjeet Sohi says the government is not assuming the National Energy Board will once again recommend the Trans Mountain pipeline expansion go forward as he asks it to go back and reconsider the environmental impact of increased oil tanker traffic off the coast of British Columbia.

The Liberals are giving the board 22 weeks to conduct a full assessment impact on the number of oil tankers in the Burrard Inlet — from five a month to about 35 a month — that the pipeline will bring. The board is to provide its finding to cabinet by the end of February on whether the pipeline should be approved again and if so, what additional conditions must be met.

The NEB approved the expansion in the spring of 2016, but the Federal Court of Appeal last month overturned that approval, ruling it was given without a proper review of the impact the project will have on marine shipping and, in particular, whether it poses additional risks to the endangered southern resident killer whales.

Sohi said Friday the court decision to tear up the federal approval of the pipeline was "disappointing, but by no means insurmountable." However he also said the government wants the NEB to keep an open mind as it does the review.

"We will not prejudge the outcome of the NEB," Sohi said.

Sohi said the 22-week time frame was picked because the Liberals believed it was enough time to conduct the needed assessment. He denied the timeframe had anything to do with trying to get the pipeline back underway before the Alberta election in May — or before the federal election in October 2019.

"We are not focused on election cycles," he said. "What we are focused on is what needs to be done right."

In Edmonton Friday, Premier Rachel Notley told reporters the deadline is reasonable, but said she is skeptical the process will unfold as expected, or that there won't be further legal challenges.

"If (the deadline) starts to slip and the goalposts shift, I can assure you that the voices of Albertans will be loud. ... Through my government, they will be heard," she said.

"Should it start to appear that (legal) game playing is working, we will hold Ottawa's feet to the fire."

A new round of Indigenous consultations will also happen, but the timeline has yet to be determined, said Sohi. The Federal Court of Appeal also cited an improper consultation with Indigenous communities as a reason for ripping up the federal approval for the expanded pipeline.

B.C. New Democrat Nathan Cullen said the government's claim it is keeping an open mind as it does further reviews was ridiculous.

The original NEB review of Trans Mountain was done mainly in 2015, before the Liberals were elected. Keith Stewart, an energy strategist with Greenpeace, said the Conservative government was eager to avoid looking at tanker traffic increases because any review of it would surely find they pose a risk to the orcas, and therefore the NEB couldn't say the pipeline won't have any significant impacts on the environment and aquatic life.

Southern resident killer whales are in extreme peril, with only 75 of the iconic mammals known to be left, and no surviving calves since 2016.

Fisheries Minister Jonathan Wilkinson said Friday the government knew when it took office that more needed to be done to help keep the whales from going extinct and further protections the Liberals have put in place will be taken into account in the NEB review.

"The plight of the killer whale doesn't relate directly to this project alone," he said. "It relates to lack of availability of chinook salmon, contaminants in the water and all vessels in the Salish Sea, the 3,200 large container ships and cruise ships, thousands of BC ferries, tens of thousands of recreational boats ... six more oil tankers a week is something that is important to mitigate, but this is a far bigger issue."

The Union of B.C. Indian Chiefs was not pleased with the government's intention to try to keep the pipeline alive. Grand Chief Stewart Phillip said "the Trudeau government's fanatical determination to build this disastrous pipeline and tanker project is boorish and disheartening."

The Trans Mountain pipeline was owned by Kinder Morgan Canada until last month when the federal government bought it for $4.5 billion, hoping federal ownership would overcome the obstacles stopping it from being built. The court decision overturning the approval was issued the day before the sale was finalized.

— With files from Dean Bennett in Edmonton.