Farmers to receive compensation as part of historic NAFTA revamp 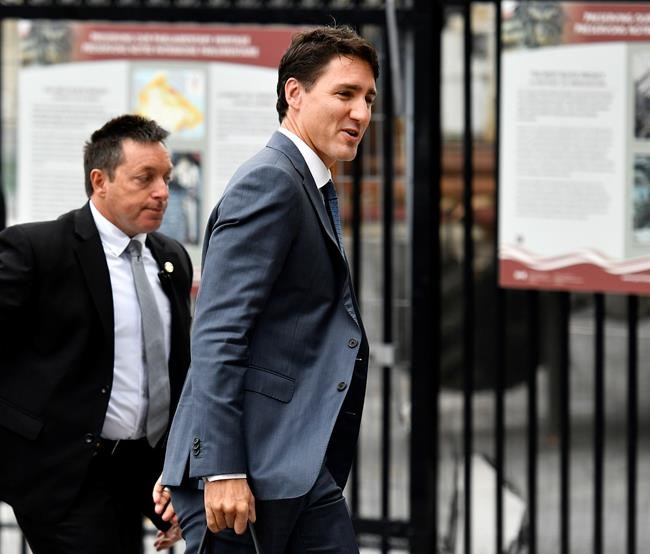 OTTAWA — Canada gave up some access to its dairy, egg and poultry industries but will keep its agricultural supply management system and avoid punishing auto tariffs under the new North American trade deal.

Prime Minister Justin Trudeau hailed the landmark agreement as a win for everyone and U.S. President Donald Trump did a victory lap at the White House as industries across Canada took stock of the new era in continental trade.

"Today we are securing a higher standard of living far into the future for the people of Canada," Trudeau said during a news conference Monday in Ottawa.

The revamped NAFTA deal — dubbed the United States-Mexico-Canada Agreement, or USMCA — was almost 14 months in the making and has 32 chapters, 11 annexes and 12 side letters. One letter promises Canada will be exempt from any future U.S. tariffs imposed on automobiles and auto parts as a matter of national security.

The deal does not, however, address the removal of the steel and aluminum tariffs Trump slapped on Canada last spring or the softwood lumber tariffs imposed in 2017. U.S. Commerce Secretary Wilbur Ross said Monday there is no timeline for removing those tariffs.

Trump said the tariffs he has imposed — or threatened to levy — may be a key reason he landed an agreement after months of agonizing talks. "Without tariffs, we wouldn't be talking about a deal."

The agreement includes new rules for the auto sector, such as requiring 40 per cent of car parts be made by workers paid at least $16 an hour, a labour rule Foreign Affairs Minister Chrystia Freeland said was unique in trade agreements and a very progressive way to protect jobs for higher-wage workers.

Freeland highlighted Canada's success in maintaining the dispute-resolution process that sends trade quarrels between countries to an independent binational panel. Keeping that provision, previously known as chapter 19 under NAFTA, was one of Canada's lines in the sand, though the U.S. initially wanted to eliminate it.

The B.C. Lumber Trade Council said retaining the dispute mechanism was "absolutely critical." As with the steel tariffs, the new trade deal does not undo controversial U.S.-imposed duties on Canadian softwood lumber imports.

Other key aspects include lengthening the patents on biologic pharmaceuticals by two years to 10 years from eight, and increasing the amount Canadians can spend online at U.S. retailers without paying duty to $150 from $20.

Derek Burleton, deputy chief economist at TD Economics, echoed the sentiment of many in expressing relief at an agreement.

"The deal is far from perfect, but other, decidedly more negative potential outcomes — such as Canada's exclusion from a revised agreement, a 'zombie' NAFTA, and steep tariffs on Canadian auto exports to the U.S. — have likely been avoided," he wrote in an analysis Monday.

Benoit Fontaine, the chair of Chicken Farmers of Canada, likewise expressed reassurance that "a year of uncertainty over the future of the agricultural landscape in Canada is over."

Canada increased the amount of duty-free access for U.S. farmers in all five of its supply managed sectors — dairy, eggs, chicken, hatching eggs and turkey.

Fontaine says that will mean Americans can sell 12 million additional kilograms of chicken in Canada, which doesn't make chicken farmers happy, but at lets them know what they're dealing with now.

Dairy Farmers of Canada, however, issued a terse statement saying the deal will have "a dramatic impact not only for dairy farmers but for the whole sector."

Under the USMCA Canada is offering the U.S. a 3.6 per cent share of the dairy market, which is more than the 3.25 per cent it offered under the Trans-Pacific Partnership trade deal. Canada is also eliminating a recent pricing assessment for certain types of milk products that was a lightning rod of discontent for Trump.

On Monday Trump called dairy a "deal breaker" for him in the negotiations.

"Our farmers were not treated properly by Canada," he said. "Now they're going to be treated with respect."

Trudeau tried to placate Canadian dairy farmers by promising compensation. The prime minister said he knows there is anxiety for dairy producers but also suggested things could have been a lot worse.

"We know full well the American administration targeted the complete scrapping of supply management and what we did with this agreement was to protect supply management for future generations because it is a system that works," Trudeau said.

There are no details yet on how much compensation Canada is willing to provide or what form it will take.

Conservative Leader Andrew Scheer called the deal a "failure" by Trudeau to achieve anything new for Canada. Instead, he said, Canada can only brag about what it didn't have to concede. Scheer said he would have gotten a better deal.

NDP Leader Jagmeet Singh said Canadians will end up paying more for things like milk and pharmaceuticals under the deal.

Notably, the prime minister did not mention Trump in his opening remarks, saying only in answer to a direct question that the relationship with the president has been challenging during the course of tumultuous negotiations.

Trump acknowledged relations between himself and Trudeau have been "testy" but added that was simply because of the negotiations. The only thing wrong with Trudeau is that he "loves his people," the president said.

Trump has been threatening for weeks to lock Canada out of a new trade deal and proceed alone with Mexico. Just six days ago he said he didn't think Canada was negotiating fairly. But on Monday he was all smiles, calling the deal "historic."

— With files from Mike Blanchfield, James McCarten and Kristy Kirkup