Commissioner hopes Ottawa’s save-the-whales effort is not ‘too little, too late’ 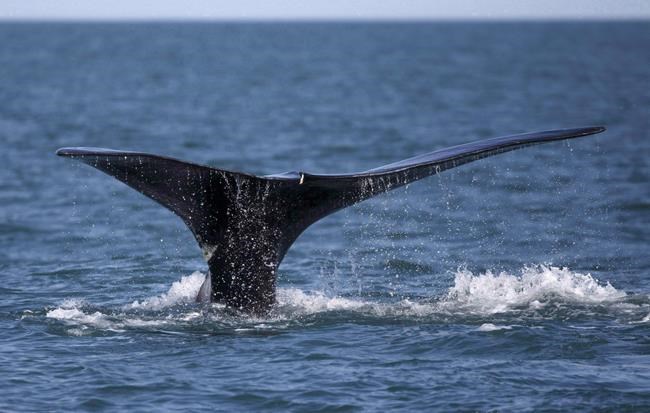 OTTAWA — The federal government didn't do much to protect some of its most at-risk whales until the majestic creatures were already in great peril, Canada's environmental watchdog says.

Environment commissioner Julie Gelfand says Canada had the tools to safeguard North Atlantic right whales, Southern resident killer whales and other marine mammals from being hit by ships, tangled in fishing gear or losing their food sources — but it waited until after 12 right whales died in a single summer and the killer whale population was on the verge of extinction.

"I hope this is not too little, too late," Gelfand said Tuesday in releasing her latest round of audits.

Gelfand's latest audits come just as Ottawa is trying to prove to the courts it is doing enough to protect the Southern resident killer whale, in particular, from risks, so it can proceed with a plan to expand the Trans Mountain pipeline.

The Federal Court of Appeal ripped up Canada's approval of the pipeline in part because the National Energy Board failed to properly take into account how the project, and the increased oil tanker traffic it will create, is going to affect killer whales. The number of oil tankers that cross the Salish Sea will go to 35 a month from about five if the pipeline expansion goes forward, and whale experts argue there is already too much boat traffic for the whales to survive.

Canada's waterways are home to 40 different species of marine mammals ranging from whales and dolphins to seals and sea lions. Nine whales on that list are endangered and another five whales are listed as threatened.

North Atlantic right whales were listed as endangered in 2005, but it took three years past the deadline to develop a recovery strategy, the audit shows. There are now only about 450 North Atlantic right whales left, and the government didn't start implementing speed limits or work to remove fishing gear until 2017 after 12 whales died in the Gulf of St. Lawrence. Many of those whales died after being hit by boats or getting tangled in gear.

There are just 74 Southern resident killer whales remaining after two whales died over the summer. They were listed as endangered in 2003 but the plan to help them recover wasn't finished until 2017, four years late, Gelfand's report says.

The audit says Fisheries and Oceans didn't do anything specific to address the lack of food sources for the killer whales, namely Chinook salmon, until this past June.

Overall, Gelfand found Fisheries couldn't say what it had done to protect 11 of the 14 kinds of whales that are endangered or threatened.

The department needs to learn from these mistakes to protect marine mammals, she said. "We don't want any more on the endangered list."

Transport Minister Marc Garneau said the government welcomes the audit and tried to put the blame on the former Conservative government for failing to act. The Liberals have introduced a number of measures to protect three kinds of whales, and will closely monitor the others, he said.

The auditors note the Oceans Protection Plan announced in 2016 does include additional measures to protect killer whales and right whales from ship strikes and other risks posed by marine vessels.

Gelfand said it was heartening to hear that no right whales died in the Gulf of St. Lawrence last summer, indicating the speed limits and other protections the government implemented had a positive effect.

Her office also looked at how well Health Canada and Environment and Climate Change Canada are controlling the risk of toxic substances, finding the main gap was a lack of knowledge about whether protection plans are actually working.

Gelfand was pleased to see the government finally following its own directive to do strategic environmental assessments of all policies, plans and programs considered by cabinet, including the potential economic, social and environmental impacts.