Nationalism and populism are in the news this week. While Stephen Harper’s new book Right Here, Right Now is getting grabbed off shelves, for my money, a more obscure release, Tom Dixon’s The Hidden Tribes of America, is a far more rewarding read.

Contrasting the authors’ views on polarization says a lot about their respective insights into nationalism and populism – and why you may (or may not) want to read either work in full.

Stephen Harper is troubled by the growing polarization in democratic politics. His new book traces this back to globalization, which he says is creating two opposing groups of citizens.

The first one includes people whose jobs, friends, and life-styles are linked to globalization. We can call them “cosmopolitans.” Their identity is increasingly international and multicultural, which is also weakening their attachment to the nation-state.

As for the second group, their livelihoods and lifestyles are anchored in their local surroundings. Typically, they live in the suburbs or rural areas and work in jobs like retail, manufacturing, or perhaps, a small business. As a result, they are far more vulnerable to “disruptions,” such as the closing of a local factory or the hiring of foreign workers.

These two groups thus see globalization very differently. While cosmopolitans support “open” policies such as free trade and immigration, those in the local group are much more skeptical. Increasingly, they find nationalists’ views attractive, such as Donald Trump’s claim that creating tariff walls will rebuild American manufacturing.

In Harper’s view, polarization results from a growing clash between the diverging interests of these two groups.

Tim Dixon is the founder of More in Common, a US think tank on how globalization is affecting identity and belonging. Dixon was in Ottawa last week to speak at a Canada 2020 seminar. His new study, The Hidden Tribes of America, leads to a very different view of polarization from Stephen Harper’s.

Dixon’s research shows that countries like the US, Germany, France and the UK contain more than two opposing identities. They include a spectrum of them, which run from open cosmopolitanism at one end to hardcore nationalism at the other, as follows: 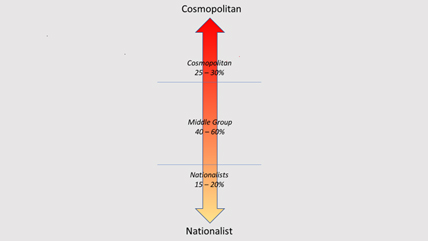 Dixon’s cosmopolitans are much like Harper’s. They tend to be more educated, live in urban centers, and support open policies. His research also finds that this group makes up about 25 to 35 per cent of the population, while the “hardcore nationalists” at the other end of the spectrum are limited to 15 to 20 per cent.

The real attention-grabber, however, is the large, somewhat amorphous middle group, which makes up between 40 – 60 per cent of the population in the countries studied. Depending on the country, this group may include two or three subgroups, each with its own mix of open and closed views, but two general features stand out.

First, while people in the middle group are concerned about their economic security and/or their identity, they are significantly less ideological and more flexible than the other two groups. They believe compromise is essential in politics and are willing to find accommodations between open and closed policies.

Second, people in the middle group deeply resent the increasing polarization of politics. The effects are spilling over into their towns, workplaces, social circles, and even their families. They blame politicians and feel abandoned by the political process.

Based on these findings, Dixon sees polarization less as a clash between two competing identities and more as a political feud that has gotten out of control.

Populists like Trump are trying to lure people from the middle group toward nationalism by claiming that their closed policies will protect local economic and cultural interests. This, of course, flies in the face of cosmopolitan thinking, and the political leaders from this group respond by calling such claims racist, backward, and uninformed.

In Dixon’s view, the back and forth between these extremes is the real driver behind polarization. This is very different from Harper’s view. It puts the blame for polarization squarely on politicians, rather than some larger, impersonal forces around globalization. It also suggests that it is up to politicians to fix the problem. More on this in a moment.

First, if Dixon is right, and 40 – 60 per cent of the population is flexible on open/closed issues, we might wonder how Harper could have missed this.

I think the idea that polarization is the result of partisan political debate – rather than citizens’ changing identities – hits too close to home. Despite his best efforts to sound impartial on this topic, there is an elephant in the room that Harper never addresses: the polarized state of Canadian politics is in no small part a legacy of his government.

As prime minister, Harper showed no interest in informing or engaging the public in policy discussions. He was not the kind of politician who worked to persuade the public on issues or who searched for middle ground.

On the contrary, Harper had a well-deserved reputation as a centralizer and “control freak.” Notoriously, he used whatever tools were available to him to avoid, subvert, or control debate: he surrounded his government with a wall of secrecy and communicated through talking points; he engaged in procedural abuses, such as massive omnibus bills; and he regularly inserted wedge issues into debates to divide the public.

Far from unifying the country, Harper’s governance style deeply divided it. And eventually, Canadians ceased to trust him, as the Ekos slide below so clearly shows: 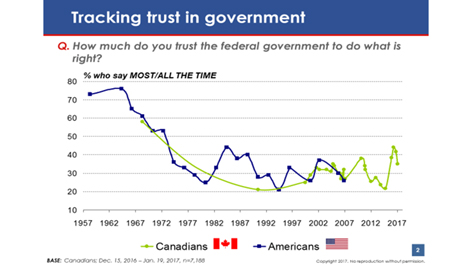 Now Harper uses this new book to reposition himself as a moderate populist. Perhaps this is fitting. In the end, his approach to governance is not that different from Donald Trump’s. Both are fierce centralizers who believe that governing is all about gaining control over the people and institutions around them.

The difference between them is mainly one of style and degree: Where Harper used process and tactics to wrest control, Trump uses populism and nationalism; and, while Harper took centralized control to new heights, Trump seems determined to make himself America’s first autocrat.

At this troubled moment in history, I think the hopeful takeaways from comparing these two works are, first, that people in the middle group are not extremists by nature; and, second, that the public is not inexorably divided.

Dixon’s research throws real doubt on such assumptions and gives us reason to believe that political leaders can still expect to win people over through genuine debate. It shows us, in other words, that – polarization notwithstanding – democratic politics is still possible.

Abacus Data’s Bruce Anderson has arrived independently at a similar conclusion. Drawing on Abacus’ research, he argues that about 27 per cent of the Canadian electorate – some eight million people – fall into a category he calls “persuadables”:

These people are typically unhappy about some things the government has done; think electoral reform, Trans Mountain Pipeline, plans for a carbon tax. But they aren’t sure if any alternative would be better. So they look at each issue in a pragmatic, non-polarized way. They crave a more sensible, down-to-earth, less bombastic pitch.

Couldn’t have said it better myself.