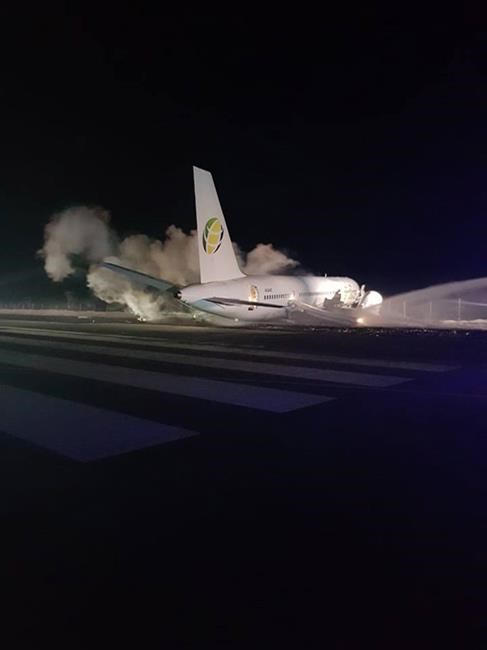 A mechanically faulty Toronto-bound plane's destructive emergency landing and subsequent crash through a fence at Guyana's main international airport left its passengers, including dozens of Canadians, largely uninjured but still badly shaken, one of those on board said Friday.

Invor Bedessee was among 82 Canadians on Fly Jamaica flight OJ256, which experienced a hydraulics failure moments after departing from Georgetown, Guyana.

While grateful to have escaped injury, Bedessee said he was still processing the close call hours later.

"I'm still shaking, I'm so shocked," the Toronto man said from a Georgetown hotel. "It's just a shock through my body ... I tried to sleep, but I couldn't do it. It’s not possible."

Airline officials said the Boeing 757-2000 aircraft experienced an emergency less than 20 minutes after taking off from the Cheddi Jagan International Airport and skidded off the runway upon landing, damaging its right wing and engine.

Bedessee, who was returning home with a friend after a week's golfing vacation, said trouble began on the flight well before takeoff when crew members and technicians spent 40 minutes struggling to close a door.

The eventual takeoff went smoothly, but he said it didn't take long to learn that something was amiss.

The captain notified the 128 people on board of the hydraulic problem and said they would be returning to the airport, Bedessee said. The flight then made several "s-shapes and circles" in the sky, Bedessee said, in what he presumed was an effort to dump fuel.

The landing appeared to go smoothly at first, but soon the tires appeared to be "free-wheeling on the tarmac," he said.

The aircraft went to the end of the runway where spikes designed to halt its progress burst several tires, he said, noting that several passengers were screaming and praying by that point.

"Then the plane swerved to the right and the right wing was flapping and it ripped apart away from the main fuselage," he said. "And then the engine actually rotated 90 degrees the other direction."

The plane barrelled through a chain-link fence before finally coming to a halt at the top of an embankment, Bedessee said. An inflatable slide was then deployed to help passengers evacuate the aircraft.

Fly Jamaica reported that two elderly passengers had been taken to hospital as a precaution after the landing, and Bedessee said any injuries were likely sustained during the evacuation process.

"People were coming down, and the people at the bottom were not getting up fast enough," he said. "They're getting kicked in the back, pushed around, walked over."

Global Affairs said none of the Canadians on board sustained injuries, adding that consular assistance was available to anyone needing it.

Fly Jamaica said the airline is currently making arrangements to fly the plane's passengers out of Guyana. The airport has also set up a hotline for family members looking for assistance and information.

The incident is not the first at Guyana's largest airport.

In July 2011, a Boeing 737-800 aircraft belonging to Trinidad-based Caribbean Airlines crashed at Cheddi Jagan after landing too far down the runway and running out of braking space, injuring several people. The runway then was 2,255 metres long, but is currently being extended to 3,048 metres.

— with files from the Associated Press.