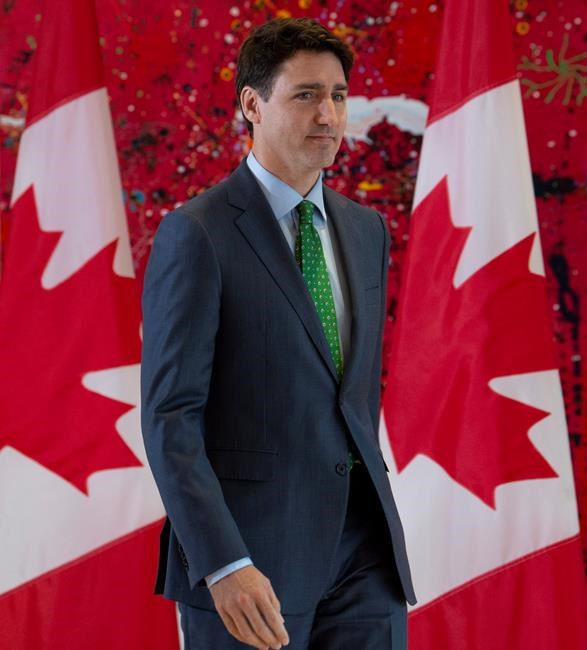 SINGAPORE — Canadian companies doing business with a bloc of Asian nations need to stick around and do the hard work of building trade ties even after the ink dries on any government-struck trade deals, Prime Minister Justin Trudeau said in laying down the challenge Tuesday.

Speaking to a room of Canadians already invested in the region and local companies interested in investing in Canada, Trudeau tried to frame Canada as an isle of political, social and economic stability in the world — noting the ease to get a visa for top tech talent relative to the longer times in the United States.

It was Trudeau's first event after landing in Asia. It sets the stage for what the Liberals hope will be a clearer picture of how to pursue freer trade with a 10-nation bloc of major suppliers and customers, which includes Singapore.

Many members of the Association of Southeast Asian Nations are experiencing robust population growth, and their consumer classes are expanding more quickly than in the rest of the world.

"For them to hear the Canadian story, for them to see the prime minister is exactly the kind of message that we want our government to send."

The message Trudeau sent back to those businesses was that they needed to do their part because a trade deal doesn't automatically boost business ties.

"The real work, actually, gets started after you have signed the papers," Trudeau said at the start of the meeting.

"Building the relationships, building the connections, building the facility and also changing mindsets — getting Canadian companies to see the opportunities we have around the world to partner and invest."

While many Canadian businesses big and small flirt with expansion in Asia, they often retreat from pledges of investment and go back to the trading partner they know best — the United States, said Lorna Wright, executive director of the Centre for Global Enterprise at York University's Schulich School of Business.

Those kinds of commitment issues pose a problem to trade with east Asia, a region where relationships are more valued than a business case or product.

"With Canada blowing hot and cold — this year we're there, next year we're not, economy goes down in the U.S. (so) we go to Asia, the economy gets back up in the U.S. and we head back out again — that doesn't cut it," Wright said.

Expert suggest the Liberals' free trade hopes with ASEAN are at a fork in the road: continue talks toward a free-trade deal with ASEAN, which could come with big benefits but take years of painstaking work; or convince ASEAN nations that have not already done so to sign onto a newly ratified Pacific Rim trade deal, called the Comprehensive and Progressive Agreement for Trans-Pacific Partnership — or CPTPP for short.

Former Quebec premier Jean Charest says a confluence of events — Canadian trade deals finalized with Europe and Pacific Rim countries, and a new one in principle with Mexico and the U.S., while President Donald Trump raises trade barriers with others — gives Trudeau help with either path.

"It puts the prime minister in a much better position in the sense of, he's uniquely on the offensive. He is in there to say we want to be part of (this)," said Charest, who is the honorary chairman of the Canada-ASEAN Business Council. "It will be put in the backdrop of this broader world to say, 'With everything that is happening on the trade front, all this makes sense for you and it makes sense for us.'"

A preliminary study of a Canada-ASEAN trade agreement has been done. Hammering out a final agreement could take up to eight years, Charest said.

Trudeau will meet ASEAN members on Wednesday, joining them for some of the meetings associated with the annual East Asia summit, which is one of the most important gatherings in the region. Trudeau is there for a second year in a row, having been the first Canadian prime minister to attend last year.

But he won't be part of a regional security gathering of 18 countries, including the U.S., China and Russia.

Note to readers: This is a corrected story. Trudeau will not be taking part in the security table at the East Asia summit this year.