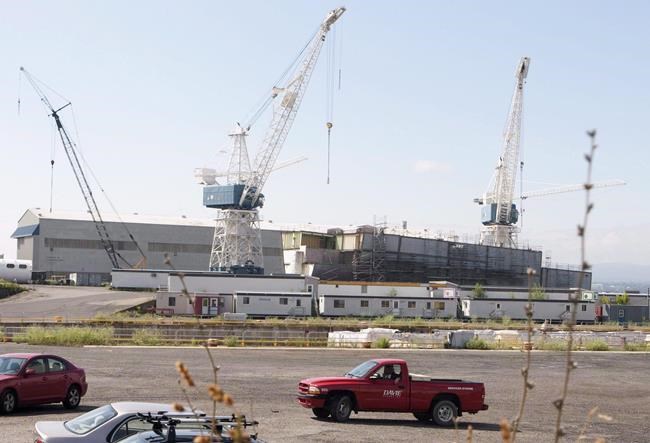 OTTAWA — Three used icebreakers for the Canadian Coast Guard will cost 30 per cent more than the federal government previously said — an increase that officials have blamed on tariffs and fees, but one expert says is proof of a lack of planning.

In August, the government gave the cost of the three icebreakers as $610 million when it announced its plan to buy them from Quebec-based Davie Shipyard without a competition to temporarily augment the coast guard's aging fleet.

Budget documents recently tabled in the House of Commons show the government is setting aside $827 million this fiscal year for the vessels, which are docked at Davie's yard across the St. Lawrence River from Quebec City.

Public Procurement Minister Carla Qualtrough's office said Tuesday the government always said it planned to spend more on the vessels than $610 million because the budget only covered purchasing the icebreakers and initial conversions for the first ship.

The additional $217 million is needed to cover tariffs for importing the Norwegian-made ships as well as brokerage fees, engineering work and other costs to get them up and running, said coast-guard spokesman Benoit Mayrand.

The need for additional funds did not come as a surprise to Rob Huebert, an expert on the Arctic and the coast guard at the University of Calgary, who said the maritime service has been overlooked by federal governments for decades.

He pointed to the fact the national shipbuilding strategy only includes plans to build one new heavy icebreaker as proof. Canada's 15 existing ships, of various sizes, are on average more than 35 years old and nearing the ends of their life expectancies. Coast guard officials admitted last month that they expect to use the Davie-supplied ships for the next 15 to 20 years.

"There's just a lack of planning and it's all ad hoc," Huebert said of replacing the coast guard's existing fleet. "We haven't built a bloody coast guard icebreaker since the 1980s and government keeps giving it industry's castoffs."

For its part, Davie welcomed news of the additional funds on Tuesday.

"We are pleased the government has increased the budget as it will ensure we can perform the engineering and conversion work required on the ships, which will be used for the years to come by the men and women of the Canadian Coast Guard," company spokesman Frederik Boisvert said.

One of the icebreakers will be used this winter while the other two undergo extensive conversion work at Davie's shipyard in Levis, Que., before the first returns next year and goes through a similar process.

The government's decision to buy the used icebreakers followed concerns about the current icebreaker fleet, but also an intense lobbying campaign by Davie as well as the Quebec government and federal opposition parties on the shipyard's behalf.

After converting a civilian vessel into a temporary resupply ship for the navy, Davie had warned that without more federal contracts, it would not be able to continue employing hundreds of local workers.

The icebreakers are only the latest vessels that will cost the government more than expected.

The Defence Department revealed last week that Ottawa will pay $800 million to build a sixth Arctic patrol vessel at Irving Shipyards in Halifax, which is twice as much as each of the other five vessels cost.

Half the money will actually go towards the sixth ship while $150 million will be used to slow down production on the entire assembly line and keep workers at Irving employed long enough to start work on the navy's new frigates.

The remaining $250 million will be set aside for contingencies, changes to the price of steel, increased labour costs and other variables, said Patrick Finn, the head of procurement at National Defence.

Officials are also reviewing the costs of several other shipbuilding projects in Halifax and Vancouver, including new science vessels for the coast guard and supply ships for the navy.