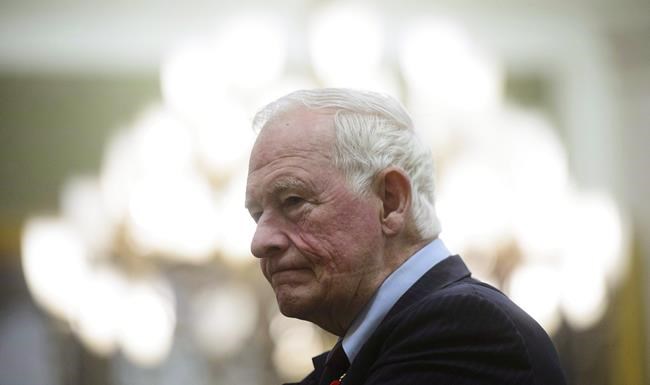 Johnston's spending disclosure comes amid public scrutiny of the expenses of a previous governor general, Adrienne Clarkson, who has billed taxpayers for more than $1 million in expenses since leaving the job.

Johnston's spending document, posted on his website on Tuesday, also includes a personal note from him that said "accountability and transparency in expenditure of public funds" are important elements for public institutions.

"I will follow the practice of filing this report annually and answer any questions that are raised as completely as I can," Johnston wrote.

Johnston also said he was grateful for the administrative assistance provided to him through the Former Governors General Program and pledged to be careful in its use and "meticulous in its public accounting."

Aside from their pensions, former governors general get lifetime public funding for office and travel expenses through a policy that has existed since 1979, on the premise that governors general do not truly retire.

When a former governor general submits bills of more than $100,000 in a year, his or her name is specifically included in an annual report to Parliament.

Clarkson has passed that threshold nine times in 12 years, including in the most recent fiscal year but details of the payments have not been disclosed.

Clarkson defended her spending in a Globe and Mail essay published in early November, saying financial support she has received is in keeping with what’s been extended to her predecessors and successors.

"Post-governor-generalship, I have continued to participate in public life in an active and meaningful way," Clarkson wrote. "I believe in public service. I always have. It has been the joy of my life. Playing golf was not an option."

Clarkson also said she fulfilled 182 commitments last year, many of them public.

They need to be more transparent and accountable for expenses, Trudeau added.

"These are people who’ve stepped up and offered tremendous service to this country but Canadians expect a certain level of transparency and accountability, and we’re going to make sure we’re moving forward in a thoughtful way," Trudeau said.