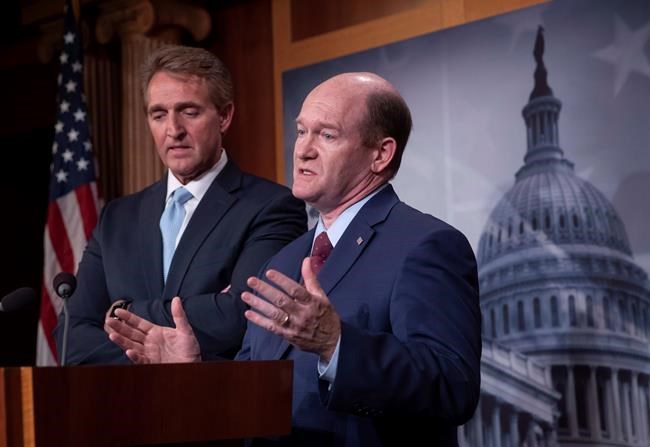 WASHINGTON — A group of U.S. senators is pushing President Donald Trump to fast-track the final text of the United States-Mexico-Canada Agreement so Congress can vote on it before the end of the year — a notion that stretches credulity for lawmakers and observers on both sides of the Canada-U.S. border.

The 12 Republican senators, including Pat Toomey of Pennsylvania, Tennessee's Lamar Alexander and outgoing Arizona Sen. Jeff Flake, are warning of the dangers of getting the trade pact approved in 2019, once a new crop of Democratic members are sworn in, comprising a majority in the House of Representatives.

"We are concerned that if the administration waits until next year to send to Congress a draft implementing bill, passage of the USMCA as negotiated will become significantly more difficult," the senators write in a letter to the White House.

"If you choose to pursue consideration of the USMCA before the end of the 115th Congress, we commit to working with you in a consultative manner to draft implementing legislation that could win our votes, as well as a majority in the House and Senate."

Senate Majority Leader Mitch McConnell has already said he doesn't expect Congress to deal with the agreement until sometime next spring — although that was before midterm elections earlier this month upended the balance of power on Capitol Hill.

Since then, a number of House Democrats, including prominent California Rep. Nancy Pelosi, have indicated they will want to see more robust enforcement mechanisms for the agreement's labour and environment clauses before they would be willing to vote in favour. Insiders, trade experts and federal officials in Ottawa, however, all remain sanguine about the likelihood Congress will eventually ratify the deal.

To expedite a vote, the senators say the White House must submit the final legal text and a draft statement of administrative action before Nov. 30, the date the three countries are expected to sign the agreement when world leaders gather in Buenos Aires for the annual G20 meeting.

However, it's not at all clear whether Congress — which will be seized next week with the risk of another partial government shutdown — will have either the time or the political impulse to deal with USMCA in an expedited fashion, even if the paperwork can be taken care of before the deadline.

Republican Sen. Orrin Hatch, the outgoing Senate finance committee chairman, told U.S. website Politico that it's "not realistic" to expect that the agreement could be passed before the newly elected Congress convenes, a period colloquially known as a lame-duck session.

Nor is it clear when the final legal text of the agreement will be ready.

Government officials in Ottawa say all three countries are in the throes of the legal vetting process, and while it's moving briskly, compared to the usual glacial pace for trade agreements, it's not done yet. Asked about the chances of such an early vote, one official pointed out Hatch's remark by way of reply.

There's also the outstanding issue of U.S. tariffs on foreign exports of steel and aluminum, purportedly on national-security grounds, which remain in place against Canada and Mexico, as do an array of countermeasures on a variety of U.S. products.

Sources close to those ongoing discussions say Canada and the U.S. remain a long way from reaching any sort of an agreement, and expect American talks with Mexico to go down to the wire before next week's Friday deadline. Opposition critics in Canada have been urging the Liberal government not to sign while the tariffs persist.

Steel and aluminum levies have been imposed on a number of other countries as well, including China, the European Union, Russia and Norway. All six took steps Wednesday towards triggering dispute hearings at the World Trade Organization, Reuters reported.

The U.S. has long argued that because the tariffs were imposed on national-security grounds, using a rarely employed section of American trade law, they fall outside the jurisdiction of the WTO.

Note to readers: This is a corrected story. A previous version erroneously stated that the U.S. midterm elections were last month.