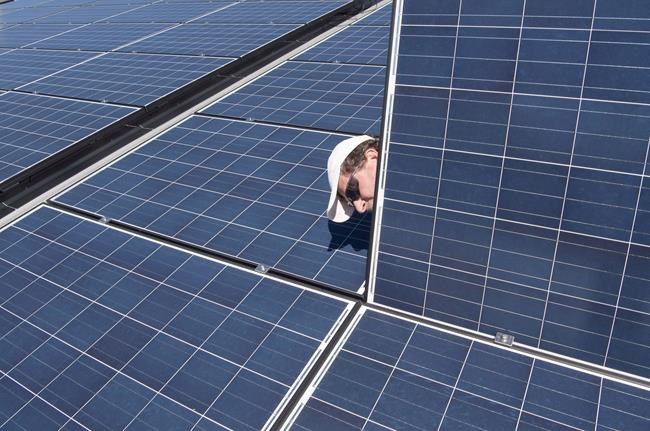 OTTAWA — Installing solar panels already makes sense for most homeowners in Saskatchewan and Ontario but the National Energy Board says the abundance of cheap hydroelectricity in Quebec and Manitoba means solar power may never make much economic sense in those provinces.

In Canada, long, dark winters means it's unlikely solar will ever become the sole source of electricity anywhere.

The NEB today is releasing a study of the costs of solar compared to current electricity prices. It has an online site where Canadians can plug in their city name and find out whether there is an economic case for solar for them now or in the future.

There are 20,000 communities across every province and territory included in the study that looked at both capacity to produce solar based on hours of sunlight, as well as the cost.

The main finding of the study is that no matter the amount of sunlight, the only places where installing and running solar panels is already cheaper than paying for power from the electricity grids are the places where power rates are already really high. That is in Saskatchewan, Prince Edward Island and most places in Ontario.

In provinces where power is still pretty cheap — mainly Manitoba and Quebec — the NEB says solar can sometimes cost more than twice as much as traditional power sources.

In Saskatchewan, for example, where electricity costs are among the highest in the country, the break-even price for solar is already 93 per cent of the current average cost of power for homeowners. But next door in Manitoba, where hydro costs are among the lowest in the country, the solar price for homeowners is 176 per cent of the current cost of electricity. In Quebec it's 223 per cent.

Ontario's time-of-day electricity rates make the cost of solar about 95 per cent of the average cost to buy power from the grid.

Charlebois said the average cost for a 5 kilowatt solar installation is about $16,000 and that price is predicted to go down as much as 30 per cent in the next five or 10 years.

The price to buy power from the grid is going up about two per cent a year. Between those increases and rebate programs for solar installations available in some provinces, over the next decade solar will start to beat the power grid price in Newfoundland and Labrador, New Brunswick, Nova Scotia, Alberta and British Columbia, the NEB predicts.

The price for power in Manitoba and Quebec is still so low that even once the cost of solar drops significantly, it is not expected to become competitive.

The B.C. coast and the eastern edge of Newfoundland are among the worst places to generate solar power because they don't get a lot of sunshine. The territories have higher costs to install solar because of the remoteness of most communities, but the high cost of power, often generated by diesel, makes solar significantly cheaper in Nunavut and the Northwest Territories.

Long term, even homeowners that use solar will need access to power grids for some of their power because the sun isn't always shining and batteries can only store power for between four and 10 hours.

The case for solar for businesses is slightly different because of differing power rates. Businesses in Prince Edward Island, Nova Scotia and Ontario may already find it cheaper to add solar panels than continue to buy power only from the grid. The NEB says rebate programs in Saskatchewan and Alberta will make solar more economical than traditional power over the next few years.