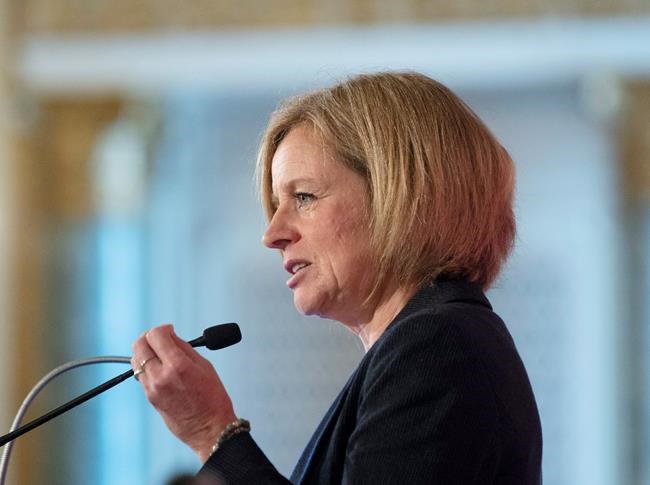 TORONTO — Alberta needs to buy as many as 7,000 rail cars if it wants to meet its goal of shipping an additional 120,000 barrels of oil a day, says Premier Rachel Notley.

In a speech to the Toronto Board of Trade Thursday, Notley said her province is prepared to buy roughly 80 locomotives, with each train pulling 100 to 120 cars.

This extra capacity will allow the province to transport 30 per cent more crude-by-rail than current levels, and would help narrow the price gap by $4 a barrel and generate an additional $1 million a day for Ottawa.

She says the plunging price of oil has reached a "crisis" point for her province and her government is prepared to make the purchase on its own, with or without the federal government's help.

"Alberta will buy the rail cars ourselves to move this oil," she told the group of business leaders. "And we're not wasting any time."

Notley anticipates a deal will be announced in a few weeks, noting that the costs will be recouped through royalties and selling the new shipping capacity.

Notley says there is enough track capacity to accommodate the additional cars, noting that this is still a stop-gap solution to Alberta's depressed oil prices.

"Additional rail is only a short and medium-term measure. But until pipelines are built, we need to move more oil by rail."

The plan will help reduce bottlenecks and is an improvement from earlier announcements, said RBC Capital Markets analyst Walter Spracklin in a note.

"We view this announcement favourably, given that the prior announcement to purchase tank cars alone we did not view as sufficient to alleviate the potential capacity constraint."

He said the added plan to buy locomotives helps address one of the biggest pinch areas, and will be a boost to the railways as well.

The price of Alberta crude is currently sitting around $10 a barrel, which Notley says is $40 less than the price of oil for other world producers.

Following the speech, the premier was asked whether her government would consider mandated production cuts, an idea that Opposition United Conservative Leader Jason Kenney has proposed.

She wouldn't comment on whether she was for or against the idea, only to say that her government has been in talks with industry leaders for the past few weeks and will make an announcement soon.

"The nature of the industry is more complex than what it once was," she said. "The way different corporations are structured are more complex than they once were so the consequences are complex, but you will hear something from us in the near future."

Notley noted there was definitely no industry consensus on the idea of a production cut.