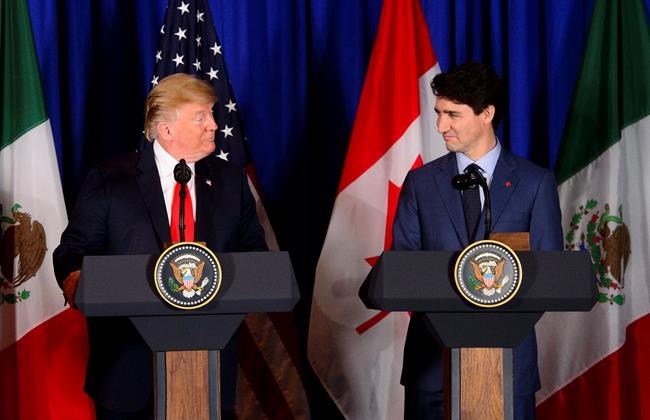 Officials said the offending section wouldn’t be in the final version of the agreement, DFC says.

OTTAWA – Canadian dairy farmers and processors are deeply disappointed with the federal government’s failure to secure the removal of a contentious provision in the new North American free trade agreement that gives Washington a say in the content of Canadian dairy programs.

In statements released within hours of the signing of the trade deal at the G20 meeting in Argentina, Dairy Farmers of Canada (DFC) and Dairy Processors of Canada (DPAC) both flayed the provision that allows Washington to meddle in their programs.

“At a meeting with your key officials following the announcement of the agreement and publication of the U.S. text, DFC was told that the issue of US oversight had not been agreed to by Canada – and would not be part of the final agreement.”

Meanwhile DPAC said the deal “provides further concessions to the United States on dairy, in addition to those which were agreed to on September 30.” That’s the day the deal was agreed to. Now that the three leaders have signed it, the agreement was finalized. It still has to be approved by the elected representatives of the three countries.

DPAC President and CEO Mathieu Frigon said the final text of the agreement “does not reflect what the Government of Canada told the dairy sector it had agreed to. It is clear to us; a conscious decision was made in the last few weeks to agree to additional concessions at the expense of the Canadian dairy sector. These further concessions provide the United States with unprecedented oversight of the Canadian dairy system and, therefore, a say on how the sector is governed.”

The contentious part of the agreement is on page 3-A-2 of the final text posted on the Government of Canada website and gives the U.S. a right of regard in any decision on how Canada responds to changing markets and requires the Canadian government to take into account U.S. comments before making a decision. It also calls for the elimination of class 6 and 7 milk.

There was no explanation available from the government, which stuck to previous comments that it had saved supply management and would compensate farmers. DFC says when the North American, European and Pacific trade deals are in full effect, about 20 per cent of the Canadian dairy market will be available to foreign product, much of which is produced with government subsidies.

Frigon said the loss of market share through the trade deal raises the question of “how will it be possible for Canadian dairy policy to remain Canadian? Such an action will hamper decision-making and weaken the competitiveness of Canada’s dairy sector.

Luc Berthold, the Conservative agriculture critic, said the final text revealed “the full extent of the Trudeau government’s failure to stand up for Canadian dairy farmers. In yet another NAFTA capitulation to Donald Trump, milk producers will now be forced to reveal all market information to their US competitors.

“Justin Trudeau told our dairy farmers that he would stand up for them and fight against this provision,” Berthold said. “Instead, he has undermined the ability of dairy farmers to manage their operations without US intervention.

“As a result of the Prime Minister’s concession outlined in the new NAFTA trade deal, we will see more market share for American exporters and less business for Canadians.”

NDP Leader Jagmeet Singh said, “The Trudeau government promised repeatedly that it would defend Canada’s supply management system and fight against Trump’s illegal tariffs, but instead he has dealt a devastating blow to supply management and signed away any leverage we had to stop the tariffs.

“Trudeau also signed the deal despite a clause that compromises Canadian sovereignty over its dairy industry, giving the U.S. power to interfere when Canada creates a new milk class in its supply management system.

“Trudeau’s Liberal government has betrayed workers and farmers in this country.” NDP International Trade Critic Tracey Ramsey said the government signed without releasing a final version of it in advance so Canadians would understand the full impact of the deal. “Yet again, despite promises on transparency around the trade deals they sign on to, Trudeau has signed the deal without letting Canadians see the actual wording of the agreement. This is wrong.”