Premiers head to Montreal for tough meeting with Trudeau 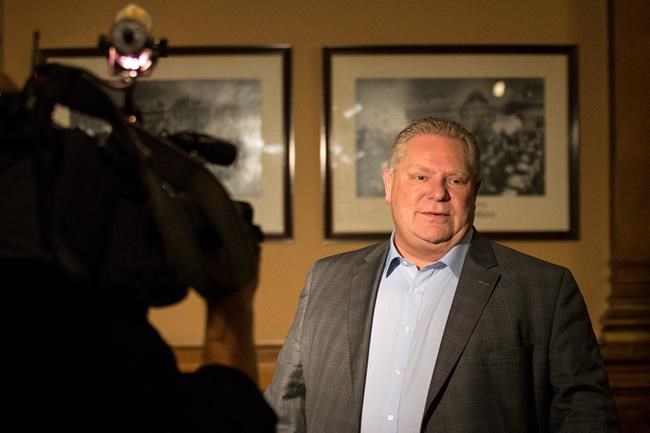 Ontario Premier Doug Ford arrived in Montreal for a first ministers conference ready to walk away from the table, his office warned.

Sources close to the premier said he's prepared to walk away from the meeting Friday if it does not include specific discussions on the federal carbon tax. And when he met Prime Minister Justin Trudeau in person at a downtown hotel for a preliminary meeting Thursday, Ford went right at him.

Ontario also wants to talk about finding new jobs for workers affected by General Motors' plans to close a plant in Oshawa next year and "the illegal border-crossers that are costing our province over $200 million," Ford said.

Trudeau was generous with Ford, at least overtly.

"It's a pleasure to welcome Doug here to Quebec, to Montreal, my hometown," he said. "This is an opportunity for us to talk about the issues that matter to Ontarians, to Canadians — economic growth, continuing to work hard to create good jobs for the middle class, creating opportunities for everyone."

Wrangling over the agenda for the Friday meeting has dominated the leadup.

"Tomorrow will be a test to see if our prime minister is listening to working people across the nation," Saskatchewan's Scott Moe told reporters in a news conference of his own. "We have had large job losses in certain industries across this nation and some of that is attributed to some of the federal government's policies."

"There is really no province in the country that doesn't owe Alberta to some degree for their schools, their hospitals, their roads. The fact of the matter is Alberta has to do well for Canada to do well," Notley said.

She noted that forecasts for Canada's economic growth are already more muted because of the low price Alberta is getting for its oil in the United States and its inability to move its product to ports for shipment overseas.

Notley also said she doesn't want to spend time listening to what the federal government says it is already doing to try to address Alberta's concerns.

"It just doesn't make sense ... talking about things that have already happened," she said. "We don't need federal ministers to explain to us what they've already done. We're all capable of reading their press releases."

Federal officials have privately conceded that little headway is likely to be made on the official objective of the meeting: reducing interprovincial trade barriers.

— With files from Dean Bennett in Edmonton, Giuseppe Valiante in Montreal and Shawn Jeffords in Toronto