‘A start:’ Alberta critical of Ottawa’s $1.6B package for ailing energy sector 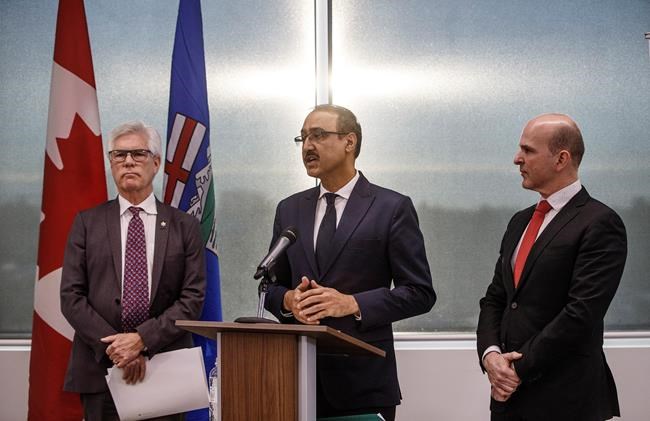 "We don't need help finding more markets. We need help moving our product, and I don't know that we could have been much more clear about that," Notley said Tuesday in Calgary. "Offering Alberta business owners and industry the opportunity to go further in debt is not any kind of long-term solution.

"Especially not when we are a province and we are talking about an industry that is very good at being profitable if given the freedom to do so."

"We understand that when Alberta hurts, so does Canada," said Sohi. "Together we can build a stronger Alberta (and) a more prosperous Canada."

Sohi said $1 billion is to be set aside through Export Development Canada for oil and gas companies to make capital investments and purchase new technology.

Another $500 million is to be made available through the Business Development Bank of Canada over the next two years to help smaller oil and gas companies navigate the downturn.

A further $150 million is to be used for clean growth and infrastructure projects.

No one from Notley's government was at Sohi's news conference. Notley called the announcement a start.

"We've heard from some small producers that this will help them get access to capital in trying times and perhaps tide them over, but it is not entirely what they were looking for, too," she said.

Tim McMillan, CEO of the Canadian Association of Petroleum Producers, said the industry appreciates federal recognition of the oilpatch problems, but said it didn't ask for money under federal government programs.

"We're a job-creating industry and an investment attractive industry if we can get our fundamental building blocks right and that's what we'll continue to push for," said McMillan.

Political opponents dismissed the money as a politically motivated and ultimately ineffective gesture.

"He is trying to save a handful of Liberal seats, nothing more."

"This announcement is too little, too late for those families suffering as the result of the Trudeau government's anti-oil-and-gas agenda," he said.

Randy Ollenberger, a financial analyst who covers major oil and gas firms for BMO Capital Markets, said the programs will likely be used only by very small companies and are unlikely to have a meaningful effect on job creation.

"If you can't physically export (oil or gas), what difference does it make?" said Ollenberger. "This is a globally traded product and we just have to be able to move it to that market."

Alberta has been roiling of late as the double whammy of pipeline bottlenecks and low prices threaten to further eviscerate its fountainhead industry, which has already endured a prolonged slump.

In recent days, there have been demonstrations and protests around the province, demanding Canada step up to help Alberta's oil industry given its broader beneficial impact on the national economy.

Demonstrators have also slammed Trudeau's government for failing to take meaningful action on pipelines, although Ottawa recently purchased the $4.5 billion Trans Mountain pipeline expansion — which would triple its capacity to the B.C. coast — to ensure it gets built.

Those demonstrations have included so-called yellow vest protesters. Some of those demonstrators came to Sohi's news conference, standing in the back, videotaping the speech, and muttering their displeasure.

"While we understand the (public) frustration ... these investments that we are making today will ensure that businesses continue to thrive," said Sohi.

"The lack of ability to build pipelines in Canada is something we're trying to fix."

In recent weeks, Notley has ordered Alberta oil companies to cut production to prop up prices, and has called for Trudeau to help the province buy more rail cars to get oil to market in the short term.

Sohi's package does not include money for that, and Ollenberger wondered why.

"They would have been better off to say, 'We've got a billion and a half dollars, we're going to put it to railcars,'" he said.

— With files from Dan Healing in Calgary