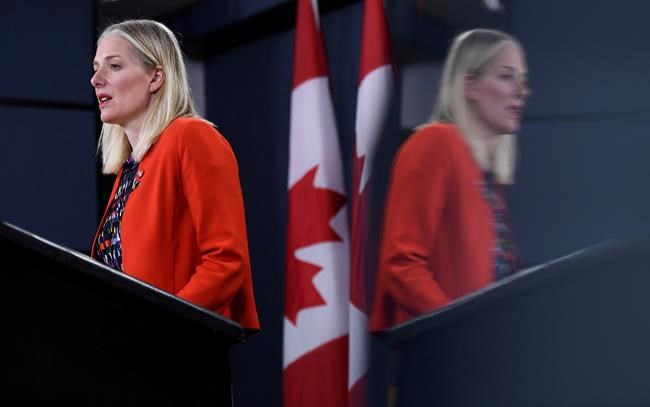 OTTAWA — Canada's current climate-change plans leave it 79 million tonnes shy of its greenhouse-gas emissions targets but Environment Minister Catherine McKenna says most of that gap will be closed if Canadians switch to electric cars and public transit more quickly.

Canada aims to cut emissions of carbon dioxide and similar gases to 513 million tonnes a year by 2030. In 2016, the most recent year for which measurements are available, Canada emitted 704 million tonnes. Computer modeling suggests by 2030 we will get down to 592 million tonnes if we fully implement all the measures Canada has planned, like the carbon tax, clean fuel standards, energy-efficiency improvements for buildings and closing coal-fired power plants.

But McKenna said Thursday that a number of moves haven't been worked into the country's models yet, such as the construction of major new transit systems and policies to cut the use of single-use plastic packaging.

She said new technology is coming fast that will help Canada get all the way there, holding up her iPhone multiple times as an example of something that didn't exist 10 years ago but that has now been widely adopted. (Apple's iPhone was introduced 11 years ago, though it wasn't available in Canada until 2008.)

McKenna's office released more details on some of the climate programs meant to make a difference. Those include proposed regulations for a clean-fuels standard that will require liquid fuels like gasoline and diesel to burn 11 per cent more cleanly by 2030. That measure alone will contribute to cutting 23 million tonnes of emissions, the government says.

New standards for solid and gaseous fuels will be introduced later, with a goal to cut at least seven million tonnes of emissions from them by 2030.

The clean-fuels standard is on top of the carbon price that will be applied to input fuels in provinces that don't already have their own starting next April. Environment officials said they can't yet say what impact it will have on the price of gasoline or other liquid fuels but acknowledged it will have one.

McKenna called the need for Canadian companies to find ways to meet the new rules an economic opportunity.

"We did not get out of the Stone Age cause we ran out of stones," McKenna said. "We got smarter and that's exactly what we're doing with our policies, including the clean-fuel standard."

Conservative environment critic Ed Fast slammed the standard as just another way the government is trying to kill Canada's oil industry. He said like the carbon price, the clean-fuel standard will raise the cost of everything.

McKenna's latest emissions announcement comes just two days after her government offered up another $1.6 billion to help Alberta's oil-and-gas sector weather a price crisis, much of it in efforts to help find new markets to sell to.

That investment was met by boos in Alberta, where the government said the money won't solve the key problem of getting its oil transported to buyers, and jeers from environment groups that said investing in fossil fuels at all is contrary to Canada's global climate-change commitments.

"Canada can't expect to meet our climate commitments when our government continues to hand out giveaways to major polluters," he said.

McKenna said she is not just the environment minister for environmentalists but also for Albertans and oil-sector workers.

"We're in a transition," she said. "Transitions to a cleaner future are hard. They don't happen from one day to the next."

McKenna's department is also updating the carbon-pricing system for big industry, giving more leeway to producers of petrochemicals, lime and cement because of competitive pressures they face internationally.

The environment ministry is not yet saying exactly how much revenue it expects to raise from big emitters but promises it will be returned to be used to cut emissions in the industries that pay it. More details of those plans are supposed to be available in 2019.