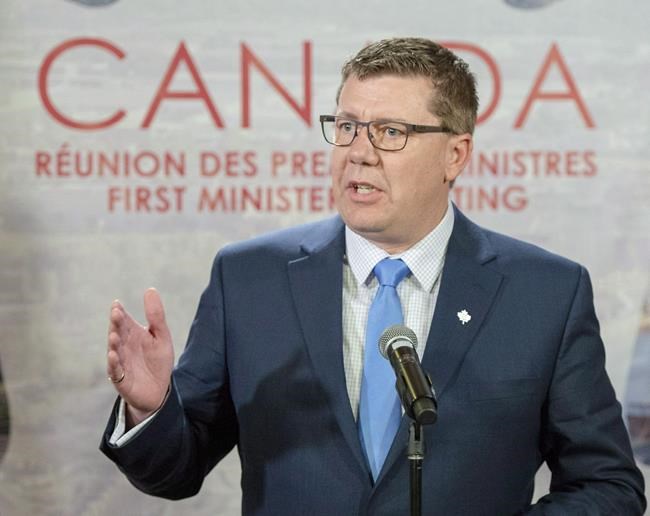 REGINA — Scott Moe is almost one year into his tenure as Saskatchewan premier and he has used his opposition against a federal carbon tax as a major front in the early battle to define his leadership.

Moe points to the pending tax as one of the biggest economic headwinds facing his province. Since replacing Brad Wall as premier at the end of January, he has asked the Saskatchewan Court of Appeal to rule on whether the federal government's plan to impose one on the province is constitutional.

The province argues its own climate change plan, which doesn't include a carbon tax, is enough to reduce emissions.

"We need to ensure that we are able to stand up against these policies and ensure that we can continue to grow our economy so that we can have the opportunity to invest in the services that people expect," Moe said in a year-end interview with The Canadian Press.

Moe has aligned himself with fellow anti-carbon-tax crusader, Ontario Premier Doug Ford. The two have visited each other twice and held a joint news conference at a premiers meeting in New Brunswick this summer.

Moe said Ford was elected to fight the carbon tax and Moe admires Ford's ability to do what he says he will.

Moe is the first to admit he's brought a different style to the job than Wall. Wall had was consistently ranked as one of the country’s most popular and well-known premiers and his gift for delivering a good sound bite made him popular on the national stage.

Moe said replicating that has never been his goal.

"I've just tried to be myself and I think that's important if there's going to be any success at all," he said.

Ryan Meili, named to the party's top job in March, has raised mental health, addictions and Indigenous issues over the last year.

He doesn't think the province should go ahead with the carbon tax court case.

"The thing that concerns me is they (government) have no backup plan," he said in a year-end interview. "They got this court case which nearly every expert, it's pretty clear, (says) is highly unlikely to be successful. And even if it is, it's months and maybe even years away."

Meili said the government has resisted taking action on climate change and that has been harmful.

"Certainly nothing you could refer to as leadership, and that's been an embarrassment," he said.

The Appeal Court will hear the case in February.

"It's an interesting time for people that are political watchdogs," Moe said. "We look forward to the next number of months."