Saskatchewan premier unsure if visiting protest camp would have helped 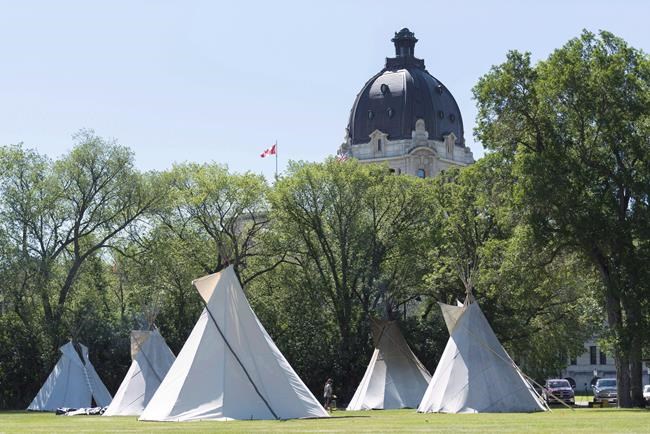 REGINA — Saskatchewan Premier Scott Moe says he's never met with anyone protesting outside the legislature and didn't see a need to make an exception when Indigenous protesters set up a camp this past fall.

Moe said cabinet members were more than capable of working through some of the protesters' concerns.

"I don't know if it would have resolved it in a quicker fashion or not. The fact of the matter is ... those individuals were engaged with on multiple occasions with multiple members of the cabinet," he said in a year-end interview with The Canadian Press.

"I haven't, in fairness, really conversed with anyone directly that is running a protest or a camp in front of the legislature."

The Justice For Our Stolen Children camp sprung up in late February — shortly after the cases of Colten Boushie and Tina Fontaine resulted in acquittals.

Boushie, a 22-year-old Cree man, died from a shot to the head on a farm near Biggar, Sask., in August 2016. The landowner, Gerald Stanley, was acquitted of second-degree murder after testifying that his gun went off accidentally.

Fontaine was 15 years old when she disappeared in Winnipeg in 2014. Her body, wrapped in a duvet cover and weighed down by rocks, was pulled from the Red River eight days later. A jury found Raymond Cormier not guilty of second-degree murder.

The camp's members were protesting what they said was racial injustice and the disproportionate number of Indigenous children in care.

Spokeswoman Robyn Pitawanakwat said a visit from Moe may have led to a solution.

"I think that him showing up to have the conversation would have indicated that he was invested in some sort of outcome that would have benefited Indigenous families in Saskatchewan," she said.

Cabinet ministers who came to the camp didn't listen to requests, Pitawanakwat said.

The camp, which was ordered to be dismantled by a judge in September, helped reunited 12 families with children in care, she said.

"We were able to help individual families but the system is still working against Indigenous youth."

The government is working with 17 First Nations on child-and-family- service agreements but more effort is needed, Moe said.

Since the Boushie trial, Moe's government has proposed updated trespassing laws which would require people to get permission before going on private land.

The Federation of Sovereign Indigenous Nations has said the proposals were drafted without any Indigenous consultation and warns that the planned legislation could lead to more clashes.

Moe said everyone in the province was consulted through an online survey and he continues to talk to First Nations leaders across the province.