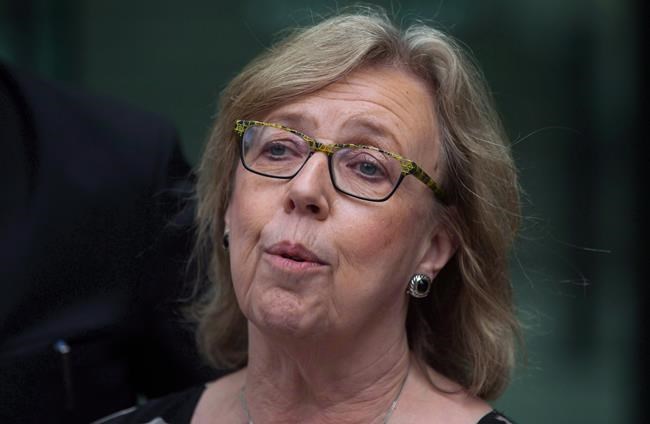 OTTAWA — Finishing fourth in a byelection is not usually cause for celebration.

But delight was in the air for Elizabeth May and the Green Party of Canada over their candidate's fourth-place result in the recent byelection in the eastern Ontario riding of Leeds-Grenville-Thousand Islands and Rideau Lakes.

Not because they came anywhere close to taking the seat — Conservative Michael Barrett cruised to an easy win — but because the Greens finished just 24 votes shy of the NDP.

"Virtual tie between the Greens and the NDP," screamed the headline on a news release issued the next day.

The tally was 883 to 859, each drawing about three per cent of the vote. But for the Green party it was a sign they are now sitting at the big-kids' table and maybe, just maybe, will be competing for more than scraps come next October.

"The wind is in our sails," May said in an interview with The Canadian Press shortly before Christmas.

It has been a long time coming for a party that many still consider a fringe entity. The Green party has existed in Canada on paper since 1983 but has just one MP ever elected: May won in both the 2011 and 2015 elections in the Vancouver Island riding of Saanich-Gulf Islands.

The party has many times polled well between elections but when voting day comes, their vote scatters to other parties Canadians feel have better shots at victory. In 2015, May admits, they lost half their vote in the final week of the campaign. She won her seat again but the Green candidate in Victoria, who had been polling well, ended up a disappointing second to the NDP's Murray Rankin, nearly 7,000 votes behind.

But with nine Greens elected at the provincial level in four provinces, and the party leading the governing Liberals in recent polls in Prince Edward Island, the Greens are enjoying a new kind of momentum and confidence, not to mention public profile, that is putting a spring in their step.

The Greens are also rising as the NDP and their new leader, Jagmeet Singh, are struggling to find their place. May, who has been the Green leader since 2006, appears to be better known nationally than Singh. The two were tied in a recent Abacus Data poll, with 11 per cent of Canadians backing each as their preferred prime minister. In a Nanos Research poll in October, May was ahead of Singh when Canadians were asked who they thought best suited to deal with mercurial U.S. President Donald Trump.

The NDP still outpoll the Greens in voting intention but some political insiders are openly wondering if May and the Greens are going to be the spoilers for Justin Trudeau's effort to win a second election.

The pollster said the Greens are still polling relatively poorly, somewhere near seven or eight per cent. But he said more than one-third of Canadians are willing to consider voting Green, and the next election is going to be fought with climate change as a top issue, which is the Greens' bread and butter.

"The environment is potentially ripe for the Greens to make a breakthrough," he said. Though, he added, "it doesn't mean they will."

Nik Nanos, chief data scientist and founder of Nanos Research, doesn't think the Greens are poised to take over from the NDP as the main alternative to the Liberals on the left. He said for that to happen Singh and the NDP would need to implode. But he said the Greens could be the "stealth" vote in the next election, as Canadians look for alternatives to the status-quo parties in an era of voter fatigue with traditional politics.

"From all the numbers I watch, I'm actually watching the Green party the closest," Nanos said.

Nanos said May very likely will have company after next October, with British Columbia and Quebec the two places ripest for them to win another seat or two.

May is hoping that the strategic voting she blames for losing so many potential votes in 2015 won't matter next time, when there isn't a progressive-voter push to defeat a Conservative government. She is counting on former Conservative Maxime Bernier and his new People's Party of Canada being enough to take votes from the Conservatives to leave voters free to choose who they really want among the other parties on the left.