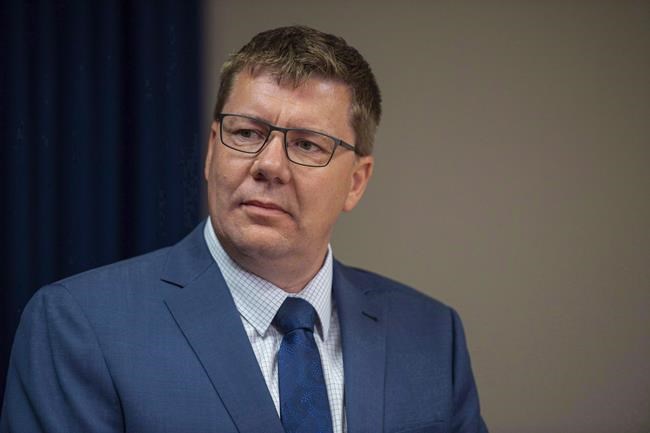 REGINA — Saskatchewan Premier Scott Moe apologized to survivors of the '60s Scoop Monday for failing them and leaving them "caught between two worlds."

"We are sorry for the pain and the sadness that you have experienced. We are sorry for your loss of culture and language. And to all of those who lost contact with their family, we're so sorry."

About 20,000 Indigenous children were seized from their birth families and relocated to non-Indigenous homes starting in the 1950s until the late 1980s.

The practice stripped children of their language, culture and family ties.

Moe said the consequences are being felt to this day and he thanked the survivors, now adults, who told their stories at six sharing circles the government set up so that the province could better understand what happened.

Survivor Kerry Opoonechaw-Bellegarde, 43, said she felt lonely going into the legislature because she wanted her parents to be there. Both of her parents were residential school survivors.

She had hoped Moe would mention the parents of those seized in his apology. She met with Moe afterwards but left disappointed.

"I showed him the picture of my parents and I said, 'You forgot to directly apologize to our parents,'" Opoonechaw-Bellegarde said.

Robert Doucette, a survivor and co-chair of Sixties Scoop Indigenous Society of Saskatchewan, said he cried during the ceremony as he thought about lost members of his family that he'll never see.

The apology was a highlight of his life and a step in the right direction, he said.

"I waited 56 years for this apology," Doucette said. "I heard the premier say he was sorry, and there was acknowledgment of the harms that they perpetrated on First Nations and Metis children and I appreciate that."

Survivor Terri Parsons said the apology was very moving and needed to be said. Alberta and Manitoba have already apologized for their role in the '60s Scoop.

"It's a step in the right direction for the future, even for my daughter and the future generations," she said.

Moe acknowledged that there "is nothing that we can offer that will fully restore what you have lost.

"But what we can offer is the solemn assurance that government policies have changed and they continue to change."

Some survivors said before the apology that they hoped it would come with action to reduce the number of children in care.

The number of children in out-of-home care in Saskatchewan was over 5,200 at the end of September.

Chief Bobby Cameron from the Federation of Sovereign Indigenous Nations, which represents 74 First Nations in the province, did not attend the ceremony.

He said the apology is empty if it's not accompanied by action and called for child welfare reform.

"Our First Nations children are still being ripped away from their families, communities and culture," Cameron said in a statement. "This needs to stop immediately."