‘That’s all I needed to hear:’ Truck driver in Broncos crash pleads guilty 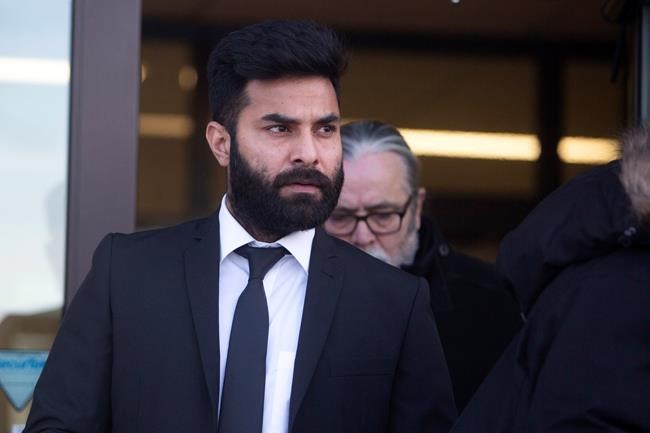 MELFORT, Sask. — Scott Thomas was sitting nearby in the courtroom Tuesday when a truck driver pleaded guilty to every charge against him in a highway crash that killed 16 people on a junior hockey bus and left 13 players forever scarred by the disaster.

Thomas lost his 18-year old son, Evan, in the Humboldt Broncos collision and always wanted the trucker to take responsibility.

Standing in the bitter cold outside the provincial courthouse in Melfort, Sask., the Saskatoon father said he's relieved the case is moving on to sentencing.

He isn't worried about whether Jaskirat Singh Sidhu will go to prison for a long time.

"If he spends a day, if he spends 10 years, time is irrelevant," Thomas said, fighting through his emotions. "He was guilty. He acknowledged that. That's all I needed to hear."

Sidhu was driving a transport truck loaded with peat moss last April when the rig and the Broncos team bus collided at a rural intersection. The team had been on its way to a Saskatchewan Junior Hockey League game.

"I plead guilty, your honour," Sidhu said as he stood before the judge.

He made no other comment as he left the courthouse and put his head down as he stood next to his lawyer.

Mark Brayford, who recently took on the case, said more evidence still needs to be handed over to the defence, but Sidhu wanted to avoid further delays and plead guilty.

"He wanted the families to know that he's devastated by the grief that he's caused them. And he's overwhelmed by the expressions of sympathy and kindness that some of the families and players have expressed to him in spite of the fact their grief is entirely his fault."

Crown lawyer Thomas Healey said he might need up to five days for a sentencing hearing, which is to begin Jan. 28. He would not comment further.

Evidence from the crash and of the truck driver's actions have not yet been submitted to the court.

The bus was travelling north on Highway 35 and the semi was westbound on Highway 335, which has a stop sign.

A safety review done for the Saskatchewan government was released last month. It said sight lines at the spot are a safety concern and recommended removing a stand of trees that obstructs the view of drivers approaching from the south and east — the same directions the bus and semi-trailer were coming from when they collided.

The review further recommended rumble strips, larger signs and painting "Stop'' and "Stop Ahead'' on the road.

The owner of a Calgary trucking company that hired Singh was also charged after the crash. Sukhmander Singh of Adesh Deol Trucking faces eight charges relating to non-compliance with federal and provincial safety regulations in the months before the crash.

No details have been released about Sidhu's training, although a lawsuit by the family of 16-year old Adam Herold, who was killed, alleges it was inadequate.

Tom Straschnitzki of Airdrie, Alta., whose 19-year-old son Ryan was one of two survivors who were paralyzed, said he wants more answers about what happened and what the trucker was thinking.

"You're taught when you're young: red light, green light, and look both ways," he said.

"Why didn't he do that? Was he just in a hurry? Did he have to get a load in right away? Was he pressured by his bosses?"

His wife added she's worried the guilty plea will lead to a lighter sentence for Sidhu.

"I'm glad he won't be putting everyone through a lengthy, exhaustive and heartbreaking trial," she said. "However, I also hope that by doing so, he doesn't get an absurdly reduced sentence."

The family of 21-year old Logan Boulet of Lethbridge, Alta., said in a statement that "as much as this sounds crazy, we appreciate his remorsefulness."

The statement said the plea has "saved our family and all the Bronco families (from) ... the water cooler talk, the video images of the crash site, the intricate details that are private to the families and surviving victims of this crash, and a potentially ... long and exhausting trial."

Broncos president Jamie Brockman agreed that Sidhu has spared those grieving and struggling a painful trial. He said Sidhu is also suffering.

"I know Mr. Sidhu has also been deeply affected by this tragedy. His careless actions will haunt him for the rest of his life, and I'm sure it is a relief to move forward."