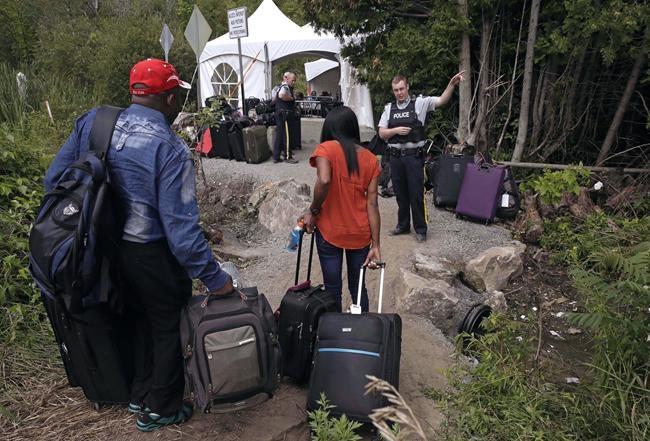 OTTAWA — The agency that processes refugee claims in Canada estimated it would need almost four times as much money as it is getting to tackle a major backlog in asylum claims, caused in part by an influx of irregular migrants.

Documents obtained under access-to-information law show the Immigration and Refugee Board (IRB) drafted estimates in November 2017 showing it would need $140 million a year, plus an additional $40 million in one-time costs, to process 36,000 extra refugee cases annually.

That's the number of cases the board would need to complete to cut the backlog while also dealing with new asylum claims.

This amount will not go far enough, the IRB said in a "key messages" document circulated within the department.

"The additional funding will allow us to finalize at least 17,000 additional claims for refugee protection and a little more than 3,000 RAD (refugee appeal division) appeals," the IRB says in the document dated May 24, 2018. "Certainly the current inventory of pending claims — a little over 50,000 — cannot all be finalized with the funding provided, and in a two-year window. To tackle an inventory of this size, while still meeting ongoing intake, requires a longer-term approach."

The number of outstanding claims has since grown to over 64,000.

The Immigration and Refugee Board has had an increase in the number of refugee claims since 2017, a phenomenon it attributes to "changes in the global environment."

In the 2017-18 fiscal year, the number of new claims began exceeding the board's capacity to process them by an average of about 2,300 cases a month, which has resulted in the growing backlog. It means asylum-seekers hoping to be accepted as refugees to Canada face wait times of up to 21 months before their claims are even heard.

Part of the problem has been an influx of irregular migrants, mainly from Nigeria and Haiti, who have been crossing the Canada-U.S. border through unofficial pathways to seek asylum.

These irregular asylum cases, totalling over 38,000 since the beginning of 2017, accounted for about 42 per cent of the pending refugee claims at the IRB, as of May 31, according to the documents.

The IRB has responded by making a number of operational changes as well as adding staff, thanks to the $74 million in new funds.

But the internal documents also reveal that even before the IRB began adding jobs, dozens of board positions had been left vacant since 2016 due to delays in the cabinet approval process for the positions.

Meanwhile, employees processing claims have raised concerns about heavy workloads as they try to chip away at the ever-growing pile of case files. They also complained of problems with their pay due to the federal government's buggy Phoenix compensation system.

"Employees are clearly feeling the effects of the increased workloads and stress (pressure)!" one employee said in a question posed to then-IRB chairman Mario Dion in an employee town hall in November 2017. "We're working hard and it doesn't seem fair that we're having issues with our pay."

"Employees are already tired. How are you planning on managing this?" another employee asked.

One staffer pressed Dion about when the influx of claims will be considered a crisis.

In his response, drafted with the help of staff, Dion told the employees that while attempts were constantly being made to work smarter, "efficiencies and hard work alone will not solve the current issues around growing backlogs."

"Simply put, the IRB is not sufficiently resourced to deal with its current workload," Dion told employees.

After this town hall, government did announce the $74 million, which will add at least 50 additional decision-makers to the IRB's refugee-protection division. Some of the money will also go toward translators, interpreters and other support staff. These resources, coupled with streamlined processing strategies, has increased the number of finalized cases by 40 per cent over the last year.

But the IRB notes more than once in the documents that a longer-term strategy will be needed to fully clear Canada's backlog of asylum claims.