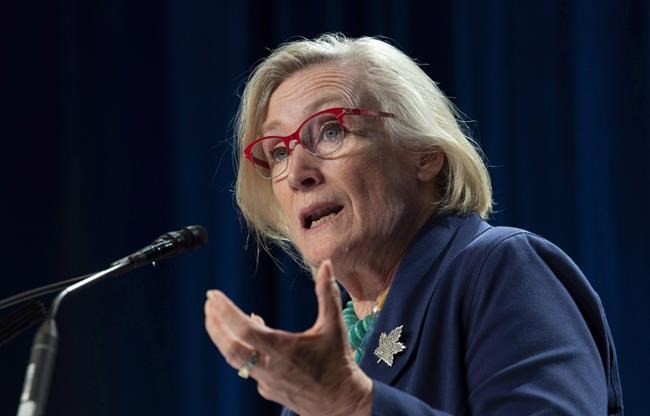 VANCOUVER — Canada's minister of Crown-Indigenous relations is pointing her finger at the Indian Act for creating a gridlock in northern British Columbia where some hereditary clan chiefs say a liquefied natural gas pipeline doesn't have their consent.

Carolyn Bennett would not say whether she believes the hereditary chiefs of the Wet'suwet'en First Nation have jurisdiction over the 22,000 square kilometres they claim as their traditional territory, saying that it is up to each community to determine its leadership structure.

But she says the situation is an example of why the federal government is working to increase First Nations capacity for self-governance, including a new funding program to rebuild hereditary structures.

"I think that we're in this transition, hopefully transformation, to be able to get more and more communities out from under the Indian Act so that there isn't this question of who speaks for the community, as they choose a governance of their own making," she says.

Coastal GasLink is planning to run its pipeline from northeastern B.C. to LNG Canada's export facility on the coast in Kitimat. The estimated cost of the terminal and infrastructure is $40 billion.

While Coastal GasLink says it has signed benefits sharing agreements with all 20 elected First Nations councils along the pipeline route, five hereditary clan chiefs say they are "adamantly opposed" and the project has no authority without their consent.

The B.C. Supreme Court granted a temporary injunction to the company instructing pipeline opponents who set up a gate along a construction access road to remove their blockade. RCMP enforced the injunction on Jan. 7, arrested 14 people, and sparked protests across Canada and internationally.

The project is within British Columbia's boundaries, so Bennett says she has not been in contact with the Wet'suwet'en hereditary clan chiefs about the ongoing dispute. But she says it points to the urgency of having decision-making processes in place where the community feels represented by its leaders.

"This is a wholly B.C. project with a B.C. court having allowed the injunction and so we are in a difficult place in terms of how decisions get taken and how urgent it is to be moving forward," Bennett says.

Bennett points to Nunavut as an example where land-claim settlements have made consent for industry projects more straightforward.

While the Crown historically acquired land from many First Nations across the country by signing treaties, only 14 treaties on Vancouver Island had been signed by the time B.C. joined Confederation in 1871, and Aboriginal title to the rest of the province was left unresolved.

It means some nations have never ceded their territories and many are in the process of negotiating modern day treaties. Eight modern treaties have been ratified.

The Wet'suwet'un were part of the landmark Delgamuukw Supreme Court of Canada decision in 1997 that ruled Aboriginal title does exist in B.C. The ruling said governments must consult First Nations whose title rights are affected.

Bennett says the federal government is working to assist First Nations in building self-governance capacity, including through the new "Nation Rebuilding Program."

She says the Indian Act, which imposed the elected band council structure on First Nations, had the effect of breaking up larger nations into "villages."

The program is a way to counter that by recognizing self-defined Indigenous groups linked culturally, linguistically, geographically or along historical treaty lines. In the past week, the government has announced 25 projects in British Columbia totalling $4.75 million, she says.

As an example, it is giving $600,000 to the Carrier Sekani Tribal Council in the B.C. Interior "to rebuild their governance and hereditary structures." Work will include developing community history books and workshops on governance, roles and responsibilities, clan systems and hereditary systems.

Bennett defended the hereditary system against criticism that it is undemocratic, saying there have always been traditional checks and balances for hereditary leaders.

"When you talk to the best knowledge keepers there were always ways of dealing with people who were not serving their communities well, these systems were in place long before the settlers showed up," she says.