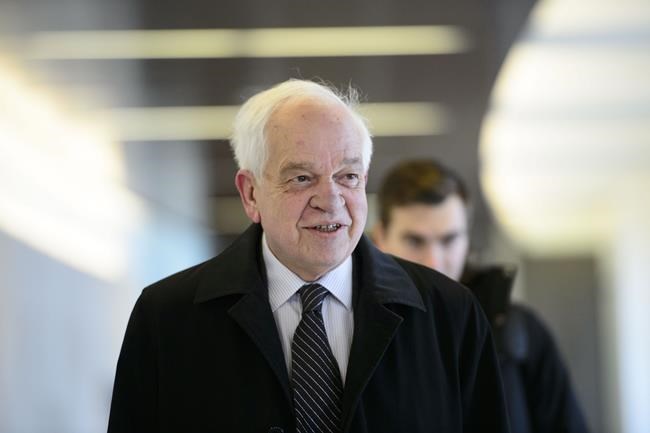 OTTAWA — The "debacle" over the firing of Canada's ambassador to China is the latest in a string of foreign-policy failures for the prime minister, Conservative Leader Andrew Scheer charged on Monday.

"It's clear that the prime minister's foreign policy is a disaster and Canadians are paying for his mistakes," Scheer said in the first question of the government in the newly constructed House of Commons in the West Block of Parliament Hill.

The final sitting of Parliament before this fall's federal election opened with the Liberals on the defensive, following Trudeau's decision on Friday to fire ambassador John McCallum.

The move came after a turbulent week that saw McCallum — an experienced cabinet minister who was parachuted into a sensitive diplomatic job with Canada's second-largest trading partner — go off script in Canada's efforts to win the release of two men imprisoned by the People's Republic after Canada arrested a Chinese telecommunications executive.

"After clowning around in India and inviting a convicted terrorist along with him, he then was forced to take concession after concession from Donald Trump. He even angered our partners in Japan and Australia. And now we have the debacle with China. Why did the prime minister show such weakness and wait so long to fire his ambassador?" Scheer demanded.

Trudeau sidestepped the question and reiterated taking points about how the government is devoted to the rule of law and remains committed to marshalling international support to win the release of the two Canadians and seek clemency for a third man facing a death sentence on drug charges.

McCallum apologized last week for misspeaking about the extradition case of Huawei executive Meng Wanzhou, who was arrested on Dec. 1 in Vancouver at the request of the United States, which wants to extradite her on fraud charges.

He was then fired after telling a Vancouver newspaper it would be "great for Canada" if the U.S. dropped its extradition request for Meng.

Freeland said McCallum's comments were inconsistent with the position of the government, which is that Meng is the subject of a legal proceeding that is not politically motivated.

The "foremost job" of any Canadian ambassador is to accurately represent the government's views, she said.

"That is what made it untenable for ambassador McCallum to remain in his role."

Freeland said she considers McCallum a friend and that he visited her home earlier this month. But Freeland offered no explanation for why McCallum chose to say what he did.

The government remains focused on gaining the release of former diplomat Michael Kovrig and entrepreneur Michael Spavor, who have been arrested on vague suspicions of violating Chinese national security, she said.

A Chinese foreign ministry spokesman had little to say Monday about McCallum's departure in his government's daily press briefing, saying that it was an internal Canadian matter. But Geng Shuang also made it clear China still wasn't buying Canada's insistence that Meng's case was an independent legal matter and reiterated his government's demand that Canada release her unconditionally.

"I want to point out that the Meng Wanzhou case is definitely not a pure judicial case," he said in translated remarks on his department's website.

"There are strong political motives and maneuverings behind it. The Chinese people and the international community know that very well."

"We are protecting Ms. Meng's rights within that process and will continue to do so," he said.