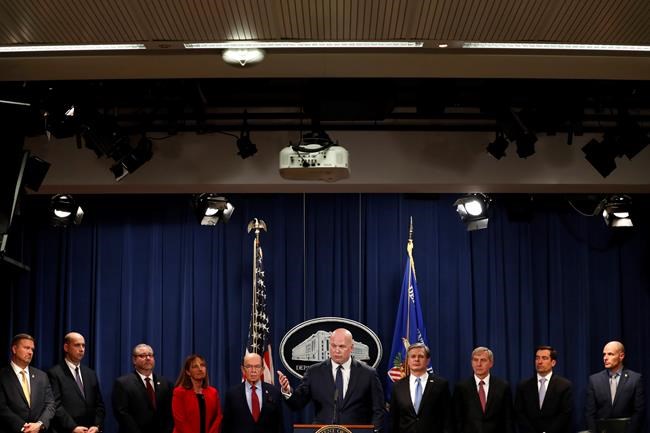 The indictment, based on 23 grand jury allegations, accuses Huawei and Meng — the company's chief financial officer and daughter of its founder — of misrepresenting their ownership of a Hong Kong-based subsidiary between 2007 and 2017 to circumvent U.S. sanctions against Iran. The company's U.S. branch is also accused of stealing trade secrets and equipment from cellphone provider T-Mobile USA.

And it was unsealed on the very day that the Trump administration announced new high-level trade talks with China, fuelling questions about whether the two are linked — questions the White House batted down.

Canada's Department of Justice confirmed late Monday that officials had received the formal  request from the United States for Meng's extradition. Her case is scheduled to return to B.C. Supreme Court on Tuesday.

Meng, who is free on bail in Vancouver after her arrest Dec. 1 at the behest of U.S. authorities, is charged with bank fraud, wire fraud and two counts of conspiracy to commit both. Huawei and its subsidiary Skycom face charges of bank fraud, wire fraud and conspiracy, as well as of violating the U.S. International Emergency Economic Powers Act — the sanctions law. Huawei and Huawei USA are also charged with conspiracy to obstruct justice related to the grand jury investigation.

The alleged conduct bore the hallmarks not of rogue actors, but of "corporate-sponsored behaviour" that was directed as company policy, acting Attorney General Matt Whitaker told a news conference.

"These are very serious actions by a company that appears to be using corporate espionage and sanctions violations to not only enhance, potentially, their bottom line, but also to compete in the world economy," Whitaker said.

"This is something the United States will not stand for, and we're going to continue to investigate and prosecute these types of cases, because ultimately it undermines the national security and economic security of our country."

Whitaker confirmed that the department is proceeding with its extradition efforts against Meng in accordance with the existing timetable, which requires that the formal request be registered with the Canadian courts by Wednesday. Both he and FBI Director Christopher Wray proffered thanks to their Canadian counterparts for their help and, in Whitaker's words, "their steadfast commitment to the rule of law."

The indictment alleges that beginning in 2007, Huawei falsely claimed that Skycom was not an affiliate, and denied operating in Iran or violating U.S. sanctions. When news reports in 2013 found that it was, "Huawei employees, and in particular Meng, continued to lie to Huawei's banking partners about Huawei's relationship with Skycom," the department says in a brief on the case.

They claimed that Huawei had sold its stake in Skycom — a sale the U.S. alleges was "orchestrated ... to appear as an arm's-length transaction between two unrelated parties, when in fact Huawei actually controlled the company that purchased Skycom." Meng, the brief continues, made a presentation in August 2013 to a banking executive in which she "repeatedly lied" about the links between the two.

"Both sets of charges expose Huawei's brazen and persistent actions to exploit American companies and financial institutions, and to threaten the free and fair global marketplace," Wray said.

Huawei responded by denying that it or its affiliates "have committed any of the asserted violations of U.S. law set forth in each of the indictments."

Huawei is "not aware of any wrongdoing by Ms. Meng," it said in a statement, "and believes the U.S. courts will ultimately reach the same conclusion."

Meng's arrest at Vancouver International Airport touched off a political furor marked by days of angry anti-Canada rhetoric from China's foreign ministry, culminating Sunday in the firing of John McCallum as Canada's ambassador to China. McCallum, formerly a longtime Liberal MP and cabinet minister, had publicly expressed confidence in Meng's case against any U.S. extradition order.

McCallum, who apologized for his original remarks, later seemed to make matters worse by saying publicly that it would be "good for Canada" if the extradition effort were unsuccessful. Prime Minister Justin Trudeau announced Sunday he had asked for and received McCallum's resignation.

But McCallum wasn't the only one to raise eyebrows with public remarks. President Donald Trump's own musings fuelled speculation that the U.S. might be planning to use the case as leverage in its trade negotiations with China.

"Whatever's good for this country, I would do," Trump said in an interview with Reuters just 10 days after Meng's arrest. "If I think it's good for what will be certainly the largest trade deal ever made, which is a very important thing ... I would certainly intervene if I thought it was necessary."

Less than an hour before the Department of Justice news conference was to begin on Monday, the White House announced that its team of high-level economic advisers would meet a delegation from China on Wednesday for two days of trade talks.

White House spokeswoman Sarah Sanders insisted, however, that the two developments were unrelated.

"Those two things are not linked; they're a totally separate process," Sanders said. "The negotiations on the trade front will continue to be ongoing."

The meetings are part of what Trump agreed to with Chinese President Xi Jinping during meetings last year in Argentina, where they hatched a plan to spend 90 days talking about what it would take for the two countries to forge a trade alliance. Trump has made levelling the playing field with China, a notoriously difficult and powerful trading partner, a cornerstone of his presidency.