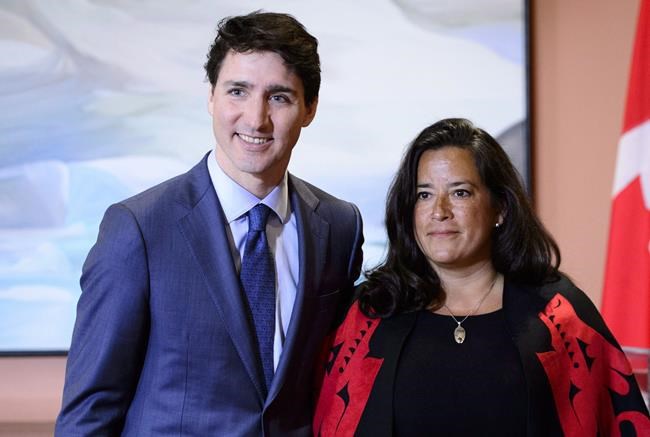 OTTAWA — Prime Minister Justin Trudeau said he was "surprised and disappointed" by Jody Wilson-Raybould's resignation Tuesday from his cabinet — one day after he'd touted her continuing presence there as proof she hadn't been improperly pressured to help SNC-Lavalin avoid criminal prosecution.

If she had been pressured, Trudeau said, she had an obligation to raise her concerns with him; she never did.

"In regards to the matter of SNC-Lavalin, let me be direct. The government of Canada did its job and to the clear public standards expected of it," he said following an event in Winnipeg.

Trudeau said Wilson-Raybould, who was attorney general at the time, had a particular obligation to raise any concerns about improper pressure but, "of course, she said nothing of that to me last fall."

In a letter to Trudeau published on her website Tuesday morning, Wilson-Raybould said she was resigning "with a heavy heart" but did not explain why.

However, she said she's aware that "many Canadians wish for me speak (sic) on matters that have been in the media over the last week" — referring to the furor that erupted after a news report last Thursday alleged she was demoted to veterans-affairs minister in January from the prestigious justice portfolio because she had refused to give in to pressure last fall from the Prime Minister's Office on the SNC-Lavalin case.

The Montreal construction giant is charged with corruption related to its dealings in Libya. It has actively and publicly sought a "remediation agreement," akin to a plea-bargain, that would let the company as a whole avoid the risk of a conviction and ban from government contracts.

As the former attorney general, Wilson-Raybould has refused to comment on the allegation, citing solicitor-client privilege.

In her letter Tuesday, she said she has hired former Supreme Court justice Thomas Cromwell to advise her on "the topics that I am legally permitted to discuss in this matter."

Wilson-Raybould said she intends to continue serving as the MP for the riding of Vancouver-Granville.

She remains a member of the Liberal caucus, where she apparently still has some friends. Just after Trudeau's news conference, Treasury Board President Jane Philpott tweeted about all the bills they'd worked on together and included a photograph of them on a boat with their arms around each other's shoulders. Liberal MP Celina Caesar-Chavannes shared Wilson-Raybould's resignation statement with an image of a clenched fist.

Her exit came less than 24 hours after Trudeau said he had "full confidence" in her and suggested she would have resigned from cabinet on principle if she had felt anyone had tried to improperly pressure her.

On Tuesday, Trudeau said Wilson-Raybould's resignation was "not consistent" with conversations he had with her at the time of the cabinet shuffle in early January or over the past few days. His office issued a terse statement that made no attempt to put any gloss on her departure from cabinet or to thank her for her service.

Wilson-Raybould informed the prime minister on Monday night of her intention to resign, the statement said. Trudeau informed the rest of his cabinet Tuesday morning about her decision and named Defence Minister Harjit Sajjan to take over responsibility for the veterans-affairs portfolio.

In Fredericton, N.B., Conservative Leader Andrew Scheer said Wilson-Raybould's resignation proves there's more to the SNC-Lavalin story than Trudeau has been letting on.

"Yesterday, he said that her presence (in cabinet) speaks for itself. Well, today, her resignation speaks for itself," Scheer said. "Clearly, there is something more than he has been forthcoming with."

Trudeau has repeatedly denied Wilson-Raybould was pressured to instruct the director of public prosecutions to negotiate a remediation agreement with SNC-Lavalin.

The Trudeau government passed a law last year which allows for remediation agreements in cases of corporate corruption, wherein a company pays reparations but does not wind up with a criminal conviction.

Government insiders have said Wilson-Raybould was involved in internal discussions last fall about whether to instruct the director of public prosecutions to pursue remediation, as is allowed by law, but they've insisted those discussions were not tantamount to pressure.

Scheer called on Trudeau to waive solicitor-client privilege to allow Wilson-Raybould to speak freely on the matter.

"The longer he refuses to do this, the more guilty he appears to Canadians."

Trudeau said he's asked David Lametti, who replaced Wilson-Raybould as justice minister and attorney general, to advise him about waiving solicitor-client privilege. However, he said: "There's a real danger — and it's been flagged for me — of unintended consequences, particularly because there are two court cases ongoing directly related to this matter that could be impacted by such a decision we might make."

Trudeau noted that solicitor-client privilege would not have prevented Wilson-Raybould from coming to him last fall if she felt she was being improperly pressured.

Scheer also wrote to Trudeau, calling on him to ensure that all documents —  including "memos, letters, emails, PINs, SMS messages and handwritten notes" — pertaining to the case are preserved.

Both Scheer and NDP Leader Jagmeet Singh called on the Liberals to support an opposition motion to have the House of Commons justice committee investigate the allegation that Wilson-Raybould was pressured. The committee is scheduled to consider the motion on Wednesday.

"Now more than ever, it is imperative that the Liberal government support the work of the justice committee that will be looking into whether there was illegal interference with the independent exercise of the former attorney general's responsibilities," Singh said in a statement.

"If Justin Trudeau and the Liberal government shut the justice committee's work down, it would send a dangerous signal to Canadians about the state of our democracy."

Liberals, who hold the majority on the committee, appear to be open to conducting an investigation. And on Monday, Trudeau said he welcomed news that federal ethics commissioner Mario Dion has initiated his own investigation into the matter, specifically whether there's been a violation of a Conflict of Interest Act provision that prohibits a public office holder from seeking to influence a decision so as to improperly further another person's private interests.

Wilson-Raybould had been Canada's first Indigenous justice minister and the face of Trudeau's commitment to make reconciliation his top priority.

Some Indigenous leaders have been highly critical of Trudeau's decision to demote Wilson-Raybould and those criticisms escalated Tuesday.

Shortly before her resignation announcement, the Union of British Columbia Indian Chiefs issued an open letter to Trudeau demanding that he publicly condemn "the racist and sexist innuendo" that's circulated about Wilson-Raybould since her demotion, suggesting that she's difficult to work with and not a team player.

Perry Bellegarde, national chief of the Assembly of First Nations, said in a statement that he was "saddened" by Wilson-Raybould's departure "concerned about the many unanswered questions" surrounding it, adding that this is "echoed by many First Nations across the country."

Trudeau said he understands that all Canadians "rightfully" have questions about Wilson-Raybould's resignation and he's doing his best to answer them, "highlighting that for folks who are puzzled by Ms. Wilson-Raybould's decision to step down, they can add me to the list."