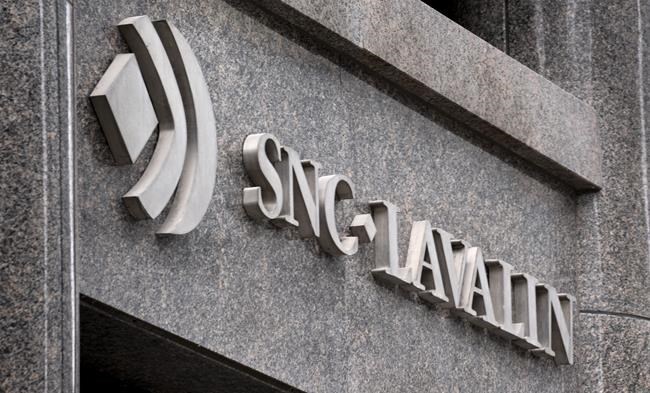 MONTREAL — Quebec prosecutors are working with the RCMP on the possibility of new criminal charges against SNC-Lavalin tied to a contract to refurbish Montreal's Jacques Cartier Bridge, court documents show.

In December, Quebec court approved a request by prosecutors to retain until June thousands of documents seized by the RCMP in connection with an investigation that drew on more than two dozen witnesses.

If the provincial prosecution service pushes ahead with the four potential fraud charges outlined in court filings, the embattled engineering giant would face a legal battle on another front.

In October, federal prosecutors told SNC-Lavalin they would not invite the company to negotiate a remediation agreement over fraud and corruption charges that stemmed from alleged dealings with the Libyan regime under Moammar Gadhafi between 2001 and 2011. SNC has filed a request in Federal Court for judicial review of that decision.

In court documents, the RCMP lays out a bribery scheme involving a $127-million Jacques Cartier Bridge contract in the early 2000s. Former federal official Michel Fournier pleaded guilty in 2017 to accepting more than $2.3 million in payments from SNC-Lavalin in connection with the project.

Following his arrest, RCMP officers seized more than 3,200 documents between August 2017 and October 2018 under an investigation dubbed Project Staple 2, according to a December court filing from Crown prosecutor Patrice Peltier-Rivest.

A search warrant — requested by RCMP officer Guy-Michel Nkili and granted by a Quebec court judge in Montreal last March 19 — states "there are reasonable grounds to believe that an offence under the Criminal Code" took place. It describes SNC-Lavalin's possible offences as "four counts of fraud on the government."

A statement from Nkili attached to the warrant application alleges: "Between 2001 and 2003, more than $2.2 million in bribes were paid to Swiss accounts controlled by Michel Fournier and his spouse, Judith Barkley Fournier, by SNC-Lavalin Inc., through the company Promotag." Fournier is the former head of the Federal Bridge Corp. and of Jacques Cartier and Champlain Bridges Inc.

SNC-Lavalin told The Canadian Press it will continue to work with authorities, noting the court files involve employees and third parties no longer affiliated with the company. Allegations in the latest court documents have not been proven in court, and SNC-Lavalin has not been charged in connection with them.

Jennifer Quaid, a criminal law professor at the University of Ottawa, said the latest RCMP investigation may have nudged federal prosecutors in the Libya case away from an agreement — under which the Crown wraps a criminal case by setting aside charges in return for fines and other penalties.

"That would seem logical if you have another corruption problem," Quaid said in a phone interview. "It is perfectly legitimate for prosecutors to ask what perception of justice will be given to the public." But she also pointed out the latest investigation involves incidents from years before SNC-Lavalin overhauled its management.

News of the latest investigation came as federal Veterans Affairs Minister Jody Wilson-Raybould quit cabinet Tuesday. Her resignation followed a Globe and Mail newspaper report that the Prime Minister's Office pressured her to help SNC-Lavalin avoid criminal prosecution when she was justice minister.

The company's shares have plunged three times in the past four months: in October, after federal prosecutors closed the door on a compensation agreement; in January, after chief executive Neil Bruce said ongoing diplomatic tensions between Canada and Saudi Arabia were hurting business; and on Monday, when a second revision to its profit forecast pushed shares to a 10-year low.

The company has struggled to move out from under the shadow of past scandals, despite a leadership overhaul, a major marketing effort and "fundamental changes" in its culture and governance that Bruce highlighted in a full-page newspaper advertisement last fall.

In February 2015, the company and two of its subsidiaries were charged with paying nearly $48 million to public officials in Libya between 2001 and 2011 to influence government decisions.

The RCMP has also charged the company, its construction division and a subsidiary with one charge each of fraud and corruption for allegedly defrauding various Libyan organizations of roughly $130 million. If found guilty, it could be barred from bidding on federal contracts for a decade.

A former CEO, Pierre Duhaime, is serving 20 months of house arrest after pleading guilty Feb. 1 to a single charge in connection with a bribery scandal around the construction of a $1.3-billion Montreal hospital.

Companies in this story: (TSX:SNC)