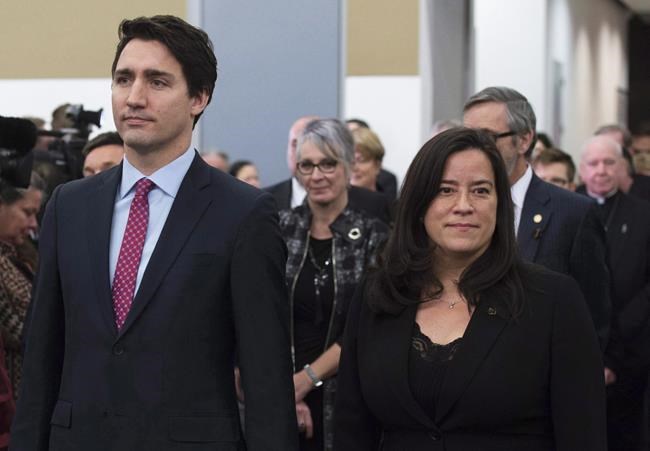 OTTAWA — Prime Minister Justin Trudeau is facing a backlash within and outside his own party after Jody Wilson-Raybould's sudden resignation from his cabinet.

The veterans-affairs minister quit this week amid reports she felt pressured to head off a criminal prosecution of Quebec engineering firm SNC-Lavalin when she held the justice portfolio.

On the inside, Trudeau's own MPs are nervous, wondering about going into an election campaign with this saga hanging over them and concerned about a lack of communication from the Prime Minister's Office — and not just about this situation.

Trudeau's repeated claims that Canada's relationship with Indigenous Peoples is the most important one this country has are being called into question as Indigenous leaders line up behind Wilson-Raybould and decry criticism of her as racist and sexist.

"It's a heavy blow to see how she has been treated," said Cheryl Casimer, political executive for the First Nations Summit, a group that includes most British Columbia First Nations and tribal councils.

The group had a regularly scheduled meeting in Vancouver Wednesday, during which a statement was released questioning Trudeau's commitment to reconciliation.

Casimer said Wilson-Raybould's rise to prominence as justice minister and attorney general in Canada gave hope to Indigenous youth for a better future for themselves and their families, and watching her be cast aside is very damaging.

"The prime minister has a lot of work to do to rebuild trust," she said.

Indigenous voters were a factor in Trudeau's winning the last election.

Casimer said some of the damage can be repaired if he and the government act on promises such as ensuring child-welfare legislation expected next week includes a recognition of First Nations jurisdiction. Moving forward on an Indigenous-rights framework and treaty negotiations would also help.

"He has all these nice words but now he needs to put action to those words," she said.

Many Indigenous leaders were particularly upset about comments from anonymous Liberals that Wilson-Raybould was difficult to work with and was considered untrustworthy by fellow members of cabinet.

Union of B.C. Indian Chiefs Grand Chief Stewart Phillip told The Canadian Press Wednesday that Trudeau "publicly humiliated" Wilson-Raybould by removing her as justice minister and moving her to veterans-affairs, and the "smear campaign" initiated in Ottawa against her has angered Indigenous people across the country.

"Everyone within the Indigenous community, rank and file, grass roots, in every single community, Facebook, social media, everyone is talking about how upset and angry they are at the prime minister's callous dismissal of such a committed, dedicated and principled person such as Jody Wilson-Raybould," Phillip said.

Those anonymous whispers about Wilson-Raybould have not abated. Nor has Trudeau, at least publicly, heeded calls from Indigenous leaders to apologize for the comments from Liberals and demand that they stop.

Trudeau himself says that all conversations he had with Wilson-Raybould about the SNC-Lavalin prosecution were within the bounds of the law. He's said that if she ever felt she was being pressured to drop the prosecution, she should have brought those concerns to him and she never did.

Most Liberals are not willing to speak publicly about their own concerns about the situation, despite several feeling they also deserve answers about exactly what went on between Trudeau's office and Wilson-Raybould.

"I'm hearing from several MPs they aren't happy with communications in general," said Greg MacEachern, a senior vice-president at Proof Strategies and a former Liberal staffer when Paul Martin was prime minister.

The Liberal caucus meets on Wednesday mornings but only when the House of Commons is sitting. This is a break week, which means MPs are in their constituencies and the next caucus meeting won't happen until Feb. 20.

"The next caucus meeting is going to be very important," said MacEachern.

—With files from Beth Leighton in Vancouver.