Wilson-Raybould asked me if I would tell her what to do with SNC case: Trudeau 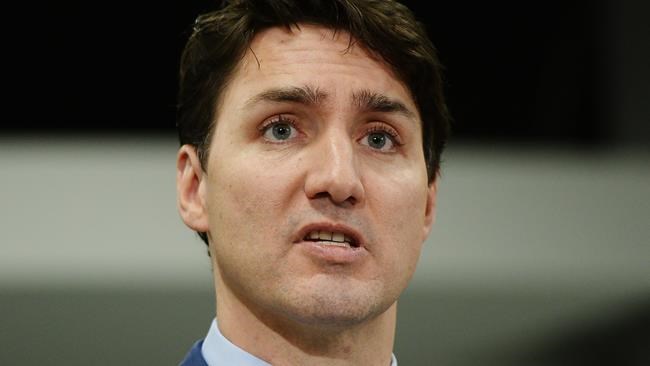 OTTAWA — Prime Minister Justin Trudeau says it was former justice minister Jody Wilson-Raybould who asked him in the fall if he planned to tell her what to do in the prosecution of Quebec engineering giant SNC-Lavalin — a conversation, he says, that ended with him telling her any decision was hers alone.

The meeting has become a key incident in the controversy over allegations that Wilson-Raybould was subjected to political arm-twisting to help the company avoid criminal prosecution.

SNC-Lavalin faces the possibility of being banned from federal contracts — a key portion of its work — for a decade if the company is convicted of bribery and fraud linked to the company's efforts to secure business in Libya.

During an event in the Ottawa suburb of Kanata Friday morning, Trudeau talked about the discussions inside his government around the company, including questions asked of him by two different Quebec premiers, representatives of the company and unions and MPs.

Trudeau said the conversations were appropriate given the economic effects of a conviction for a company that employs thousands of people at home and abroad.

He said all those talks led to the fall conversation where Wilson-Raybould asked whether Trudeau would be directing her to take a particular decision, particularly whether to strike a remediation deal to let the company pay a fine and bypass criminal charges.

"We take very seriously our responsibility of standing up for jobs, of protecting jobs, of growing the economy, of making sure there are good jobs right across the country as there are with SNC-Lavalin. But as we do that, we always need to make sure we're standing up for the rule of law and protecting the independence of our justice system," Trudeau said.

"There were many discussions going on. Which is why Jody Wilson-Raybould asked me if I was directing her, or going to direct her, to take a particular decision and I, of course, said no, that it was her decision to make and I expected her to make it. I had full confidence in her role as attorney general to make the decision."

In October, federal prosecutors rejected the company's request for the remediation deal.

In January, Wilson-Raybould was moved to the veterans-affairs portfolio as part of a shuffle precipitated by former Treasury Board president Scott Brison's decision to leave politics.

Trudeau said Brison's sudden resignation from cabinet resulted in having to "move things around" on the team, including shuffling Wilson-Raybould — a decision based on what the prime minister vaguely described as "a wide range of factors."

"If Scott Brison had not stepped down from cabinet, Jody Wilson-Raybould would still be minister of justice and attorney general," Trudeau said.

"Every day we're hearing the prime minister come up with a new excuse, a new explanation, and none of them add up," NDP Leader Jagmeet Singh said in Burnaby, B.C.

"What we're seeing is an attorney general who was pressured, allegedly, by the prime minister to drop a criminal charge against a corporation that has deep ties with the Liberal party. All of this strikes Canadians as very troubling."

Conservative MP Michelle Rempel tweeted that she wasn't sure "what is worse: the inanity of the statement itself, or the arrogance of thinking we're all stupid enough to buy that pile of garbage."

Even Brison's husband seemed to catch on to the comment. Max St-Pierre tweeted: "It’s ok, I usually blame my husband for everything too."

Last week, the Globe and Mail reported that Wilson-Raybould felt pressured to instruct the director of public prosecutions to negotiate a remediation agreement with SNC-Lavalin.

Monday, Trudeau suggested her continued presence in the cabinet meant nothing untoward had happened.

Wilson-Raybould proceeded to quit the cabinet on Tuesday.

Trudeau didn't say what reasons she gave for her resignation, only that he accepted her decision, even if he didn't totally understand it.

For her part, Wilson-Raybould has cited solicitor-client privilege when asked to speak publicly on the matter. She has hired former Supreme Court justice Thomas Cromwell to advise her on what she can and cannot say publicly.

Trudeau also slammed anonymous Liberals who made unflattering remarks about Wilson-Raybould by suggesting she was difficult to work with and didn't seem to be a team player. He called the comments, some of which were made to The Canadian Press, "absolutely unacceptable."

"The sexist comments, the racist comments that have been made by anonymous sources are unacceptable and I condemn them in the strongest possible terms," he said.

— With files from Hina Alam in Burnaby