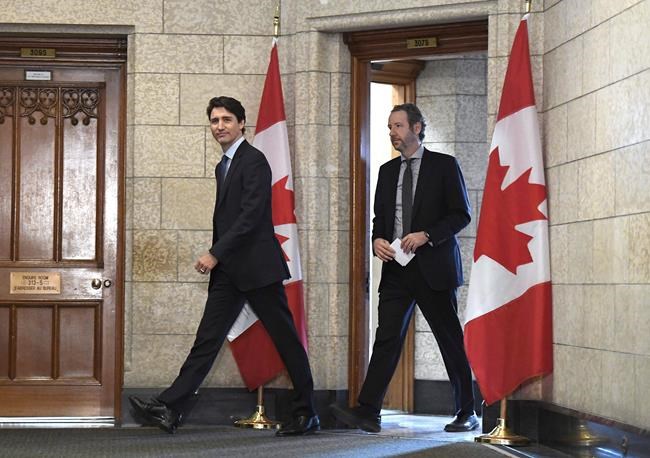 OTTAWA — Justin Trudeau's Liberal government and his hopes for re-election were rocked Monday by the resignation of his principal secretary, Gerald Butts, amid allegations that the Prime Minister's Office interfered to prevent a criminal prosecution of SNC-Lavalin.

In a statement, Butts unequivocally denied the accusation that he or anyone else in the office improperly pressured former attorney general Jody Wilson-Raybould to help the Montreal engineering giant avoid a criminal case on corruption charges related to government contracts in Libya.

Nevertheless, Butts said the allegation is distracting from the "vital work" Trudeau is doing, so it's in the best interests of the Prime Minister's Office for him to step aside.

"I categorically deny the accusation that I or anyone else in his office pressured Ms. Wilson-Raybould ... At all times, I and those around me acted with integrity and singular focus on the best interests of all Canadians," he said.

"Any accusation that I or the staff put pressure on the attorney general is simply not true ... But the fact is that this accusation exists. It cannot and should not take one moment away from the vital work the prime minister and his office is doing for all Canadians.

"My reputation is my responsibility and that is for me to defend. It is in the best interests of the office and its important work for me to step away."

Wilson-Raybould, who was demoted from justice to the veterans affairs post in January, resigned from Trudeau's cabinet last week. She has not explained why she quit and she has cited solicitor-client privilege to refuse comment on the allegation, levelled by anonymous sources in a Globe and Mail story 10 days ago, that she was improperly pressured to help SNC-Lavalin. She has hired a former Supreme Court justice to advise her on what she may legally say.

Trudeau has denied anyone pressured Wilson-Raybould to instruct the director of public prosecutions to negotiate a remediation agreement with SNC-Lavalin, a kind of plea bargain in which a company pays restitution but avoids criminal prosecution that could bankrupt it.

But Conservative Leader Andrew Scheer said Butts' departure "is the clearest indication yet that there is much more" to the affair than Trudeau has admitted.

"The events of the last several days and the ensuing chaos that has engulfed the government are signs that the prime minister is desperate to keep the truth hidden," Scheer said in a statement. "Justin Trudeau must stop hiding behind other people and end the coverup he and his office have engineered since these allegations surfaced."

Both Scheer and NDP Leader Jagmeet Singh called on Trudeau to waive solicitor-client privilege to allow Wilson-Raybould to tell her side of the story.

The departure of Wilson-Raybould, Canada's first Indigenous justice minister and the embodiment of Trudeau's commitment to reconciliation with First Nations, was a big blow to the Liberals. But Butts' exit is arguably an even bigger one.

He has been close friends with Trudeau since their student days at McGill University in Montreal. He was instrumental in organizing Trudeau's successful leadership bid in 2013 and was one of two key architects — along with Katie Telford, now Trudeau's chief of staff —  of the Liberals' stunning come-from-behind election victory in 2015. He was expected to be a key player in the Liberals' re-election bid this fall.

Since 2015, Butts has been Trudeau's closest and most trusted adviser. Opposition critics have painted Butts as a Svengali-like puppet master and even some Liberal backbenchers have privately resented the power and influence he wielded.

Butts is one of several Trudeau aides the opposition parties had wanted to call before the House of Commons justice committee to testify on what happened in the SNC-Lavalin affair. Liberal MPs on the committee used their majority last week to limit the scope of the committee's inquiry to three witnesses — not including Wilson-Raybould, Butts or any other of Trudeau's staffers — and to the legal principles underpinning the controversy.

Those principles include the recently added Criminal Code provision, which made it legal to negotiate remediation agreements in cases of corporate corruption, and the so-called Shawcross doctrine, which spells out the degree to which an attorney general may consult with cabinet colleagues about a prosecution.

The committee is to meet behind closed doors Tuesday to discuss, among other things, possible additional witnesses.

Singh announced Monday that the NDP will propose a motion in the House of Commons calling for an independent inquiry led by a former judge, which will be put to MPs for a vote on Wednesday. Motions are not binding on the government, however.

Butts has been chief among those whom opposition parties suspect were behind the alleged pressure on Wilson-Raybould. He has confirmed that Wilson-Raybould briefly raised the SNC-Lavalin matter during a meeting in early December. Butts has said that he advised her to speak with the clerk of the Privy Council, Michael Wernick.

In his statement Monday, Butts spoke positively of his relationship with Wilson-Raybould.

"I encouraged her to run for the Liberal Party of Canada and worked hard to support her as a candidate and then cabinet minister. From my perspective, our relationship has always been defined by mutual respect, candour and an honest desire to work together."

Butts says he's served Trudeau "to the best of my abilities and I have at all times given the prime minister free and unfettered advice.

"I have served the public interest, not the interests of any individual or any narrow private interest of any kind, at any time. Life is full of uncertainties but I am absolutely certain of that."

Trudeau paid homage to his old friend in a tweet: "Gerald Butts served this government — and our country — with integrity, sage advice and devotion. I want to thank him for his service and continued friendship."