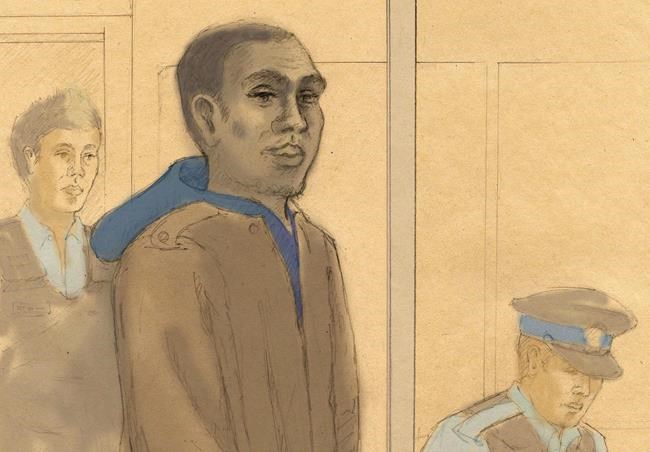 TORONTO — A man who said his post-traumatic stress disorder prompted him to open fire inside Toronto's Eaton Centre more than six years ago was found guilty Tuesday of manslaughter in the deaths of two people killed in the attack.

A jury also found Christopher Husbands guilty of five counts of aggravated assault, one count each of criminal negligence causing bodily harm and reckless discharge of a firearm in the June 2, 2012 mall shooting.

Husbands, who had stood trial on the more serious charges of second-degree murder, admitted he was the shooter but his lawyers argued he should be found not criminally responsible due to mental illness.

Defence lawyers said the manslaughter verdict suggests the jury either believed Husbands was provoked into shooting at men who had previously attacked him, or that his PTSD, along with other factors, "caused him to react instinctively without forming the intent to kill."

"It would have been very easy for the jury to look at the video (of the shooting) and to think this was all about revenge but to look at it from the lens of trauma is something significant, I think," Stephanie DiGiuseppe said outside court.

Manslaughter carries a maximum sentence of life in prison with no chance of parole for seven years. Husbands, who was being tried in connection with the mall shooting for a second time, has already spent seven years in custody.

The defence argued during trial that Husbands was in a dissociative state as a result of PTSD and did not have control over his actions.

They told the court Husbands' PTSD was triggered by a chance encounter with some of the men who had brutally beaten and stabbed him more than 20 times in an ambush attack months earlier.

The Crown, however, argued Husbands sought revenge for the stabbing and carried out the shooting as a form of "street justice."

Prosecutors acknowledged Husbands had PTSD but said he was in control throughout the attack, noting the doctors who assessed him were split on whether he experienced dissociation.

In their closing arguments, Crown lawyers had urged jurors not to consider a manslaughter verdict, saying Husbands was not provoked into opening fire.

"His actions were not impulsive. He could have just let them walk by and none of this would have happened," prosecutor John Cisorio said at the time. "He didn't shoot them instantaneously. He waited until they passed him and their backs were to him."

Court heard Husbands was at the popular downtown mall with his girlfriend and went to the food court after purchasing rollerblades and a jacket from Sport Chek.

A group of five men walked by him and Husbands pulled a gun from his satchel and fired 14 bullets in the crowded dining area, setting off a stampede as frightened shoppers ran for their lives.

Two men were killed in the shooting — prosecutors have said Ahmed Hassan, 24, died on the floor of the food court while Nixon Nirmalendran, 22, died in hospital nine days later.

Six others were hurt, including a 13-year-old boy who was shot in the head and survived, and a pregnant woman who was trampled by fleeing shoppers.

Court heard Nirmalendran and Husbands used to be friends, but their relationship soured. Husbands testified he tried to mend fences but instead had been attacked, stabbed and left for dead by a group that included Nirmalendran.

Defence lawyers said their client was traumatized by that attack and experienced paranoia, depression and constant hypervigilance, particularly in crowds.

Prosecutors said Hassan had nothing to do with the stabbing and was killed "by mistake" because of his proximity to Nirmalendran.

Jurors heard Husbands was previously tried in connection with the shooting but were not told the outcome or the reason for a second trial.

Husbands had initially been charged with first-degree murder but was convicted in his previous trial of second-degree murder. A new trial was ordered after Ontario's highest court found the trial judge had erred in denying Husbands' request regarding the method of jury selection.

Defence lawyer Dirk Derstine said the defence called more psychiatric experts in the second trial, noting that — along with developments in law and the understanding of mental illness — may have contributed to the different result.

"I think that in a very real way there's a lot more understanding that the consequences of PTSD are very substantial, very measurable and happen to a lot more people than you might imagine and that is more clear now than it was in the first trial," he said outside court Tuesday.

There were several other differences between the first and second trials, including in Husbands' own testimony.

Husbands disclosed details about his difficult upbringing, which he had not mentioned in the first trial. His previous conviction for sexual assault was not disclosed to the jury this time, but instead referred to as an assault conviction. Nor were jurors told Husbands was out on bail and breaching many conditions of his release at the time of the shooting.

The Crown was also barred from calling as a witness the teen who survived being shot in the head or any of his relatives.