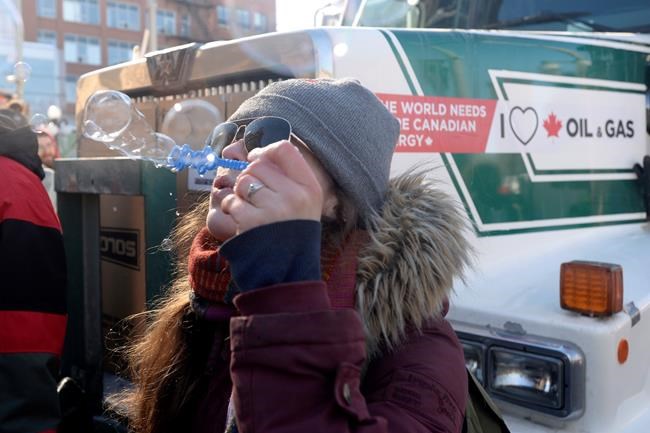 OTTAWA — A convoy of Canadians fed up with the Liberal government rolled into Ottawa Tuesday with demands as varied as their vehicles.

The United We Roll convoy began in Red Deer, Alta., on Valentine's Day and made its way east over four days with stops for rallies along the way. After four days of cross-country driving, the convoy mustered in Arnprior, Ont., just outside the capital but got off to a late start Tuesday morning. With police escorts, its trucks, buses and cars hit downtown Ottawa after the morning rush hour, disrupting the city only slightly.

Scores of semis, pickups and other vehicles occupied several blocks of the street in front of Parliament as about 150 people gathered in knee-deep snow on the Hill for speeches by organizers and a handful of conservative lawmakers.

About 30 police officers stood between the convoy members and a counter-protest that gathered nearby, focused on Indigenous causes.

"It is time that Canada has a prime minister that is proud of our energy sector," Conservative Leader Andrew Scheer told the crowd. He emphasized the convoy members' demand that the federal government get pipelines built to help get Alberta oil and gas to new markets.

Half a dozen Conservative MPs and senators blasted the Liberals' carbon tax and reiterated their support for the oil and gas sector. They left out another of the convoy organizers' complaints: that Canada signed a non-binding United Nations agreement on migration in December.

The Conservative party opposed the signing of the global compact, although Scheer did not mention it.

Nor did People's Party of Canada leader Maxime Bernier, whose omission drew cries from the crowd when he spoke about the importance of the oil industry.

"Where's the UN?" yelled one woman.

Other signs backed a variety of causes, including Canadian agriculture and protecting free speech. One called on Canadians to eat beef.

Started by Glen Carritt, the owner of an oilfield fire and safety company in Innisfail, Alta., the convoy protesters have demanded the Liberal government scrap the carbon tax and two bills that overhaul environmental assessments of energy projects and ban oil tankers from the northern coast of British Columbia.

"The core message is we need immediate action for our pipelines to get in the ground, to get to tidewater and to the rest of Canada," he told The Canadian Press in a previous interview.

Mark Friesen, a convoy organizer from Saskatoon, gave one of the day's first speeches, talking about federal policies as the results of agreements with the United Nations to implement its sustainable development agenda.

"You cut the head of the snake off, we get our country back, all of it, including pipelines built, including dumping the carbon tax, including getting rid of the migrant pact," he said.

Friesen, like many of the convoy participants, is affiliated with the populist "yellow-vest" movement, Carritt said the convoy was not itself a yellow-vest protest. Amid concerns the convoy had become a magnet for extremist, anti-immigrant activists, organizers stressed the rally was peaceful and open to anyone fed up with the federal government.

Despite charges by its critics, Friesen insisted the yellow-vest movement is not racist or anti-immigrant.

"We are a country of immigrants," he said. "We need more immigration but we need to determine these policies in Canada for Canadians."

"It's very unfortunate that the convoy that is here today, their message has drifted away from pipelines to issues that are not relevant to the discussion on pipelines," the Edmonton MP said.

A second day of protests is planned for Wednesday.