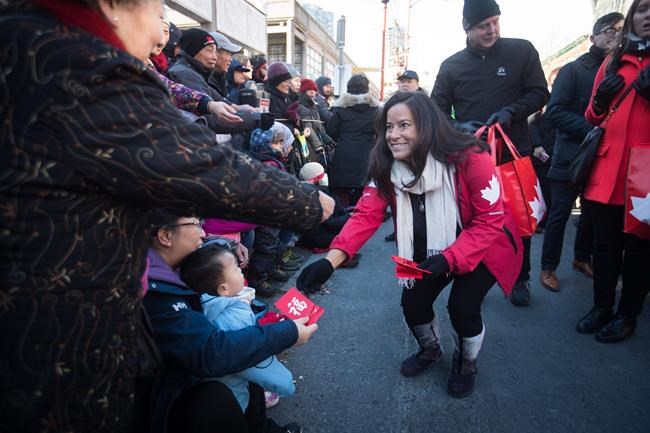 VANCOUVER — When Jody Wilson-Raybould was demoted in cabinet, a rabbi in her Vancouver Granville riding reached out to her with a message from the Bible. It quoted Joseph, who said after a betrayal: "You meant it for bad, but God meant it for good."

The intention of the note was to convey that sometimes what looks like a curse can actually be a blessing. While it's too soon to tell whether that's the case for Wilson-Raybould, community leaders say recent events have not shaken their strong support for their MP.

"She is very down-to-earth and extremely honest. She never promised something that she couldn't or wouldn't try to deliver. And she was really curious," said Dan Moskovitz, the head rabbi of Temple Sholom, who wrote the encouraging note.

"I just thought she was a lovely person and still is."

Wilson-Raybould resigned from cabinet last week amid allegations the Prime Minister's Office pressured her when she was attorney general to help SNC-Lavalin avoid criminal prosecution. She was later demoted to Veterans Affairs Canada.

Prime Minister Justin Trudeau has denied that his office directed her on the matter and has said that the departure of treasury board president Scott Brison necessitated the cabinet shuffle. On Monday, his closest adviser, Gerald Butts, resigned as his principal secretary, while denying any impropriety.

In the Vancouver riding she has represented since 2015, supporters are disappointed Wilson-Raybould is no longer in cabinet but are respectful of her decision. Reverend Steven Epperson said many members of his Unitarian Church of Vancouver are more left-wing than the governing Liberals, but they deeply admire Wilson-Raybould.

"They think that what's happened is a tragedy," Epperson said. "We're not privy to what's going on behind the scenes, but I think we're all aghast at the kind of covert and overt discrediting of her that's going on in some Liberal circles. I think it's shameful."

Many church members, regardless of party affiliation, want to find out the truth and hope Wilson-Raybould remains in politics and continues to represent the riding, he added.

Both Moskovitz and Epperson described Wilson-Raybould as a principled, committed MP who met with them and supported their initiatives, including programs to help refugees and people struggling to find affordable housing.

Several community leaders in the riding expressed pleasant surprise when they expected brief meetings with Wilson-Raybould but she stayed for 45 minutes to an hour.

Walter Wells, of the community group the Vancouver Odd Fellows, said Wilson-Raybould was extremely friendly when she sat down with him to discuss a charity contest for high school students to visit Parliament.

"I was very conscious that she was a busy person and we're just some small, local charity," he said. "I kept expecting to get out of my chair and say, 'Thank you for your time and goodbye,' but she kept asking about our history, our membership and our purpose. ... To me, (she is) not a typical politician at all."

Wells said he supports her "more than ever" after her resignation from cabinet.

Wilson-Raybould has not explained why she quit and has cited solicitor-client privilege to refuse comment. She has hired a former Supreme Court justice to advise her on what she may say legally.

The Vancouver Granville Liberal Riding Association said in a statement it stands in full support of Wilson-Raybould and her important work for the community and Canada.

"She's talking to whoever wants to speak to her. People are gathering around her. She's acknowledging everybody. She's focusing on one person at a time. She's truly, truly, listening," she said. "You can actually see from her body language, what she's saying, that her goal is to connect and educate and reassure."

Krombein said while no one knows what really happened, she has no doubt Wilson-Raybould has been completely professional.

"I feel that she's probably working through it the best way she can. It does not change our impression of her at all."