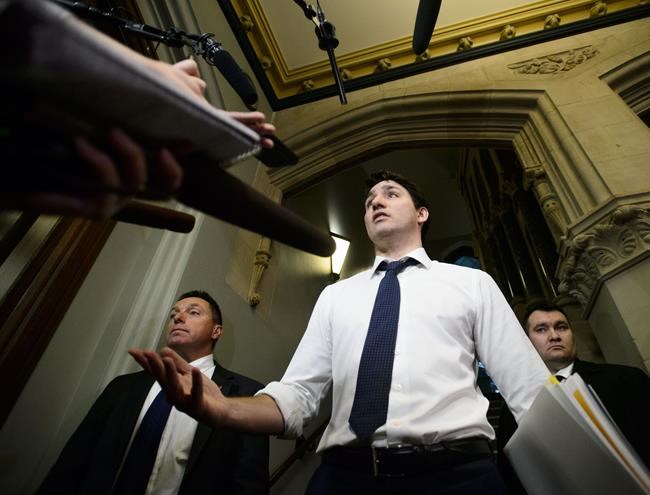 OTTAWA — A new poll conducted by Leger for The Canadian Press shows that Prime Minister Justin Trudeau is taking a personal hit in the SNC-Lavalin controversy.

Overall, 41 per cent of respondents believed the prime minister had done something wrong involving the Montreal engineering giant and former justice minister Jody Wilson-Raybould; 12 per cent believed he hadn't, and 41 per cent said they weren't sure.

Leger's executive vice-president Christian Bourque said the findings indicate something is happening to public impressions of the prime minister, at least temporarily.

"I think a lot of it leads back to how the prime minister himself has handled the crisis over the last week or so," Bourque said. "He's not found a way to reassure Canadians or ... been clear enough about his involvement, what he said or did not say, so that a lot of Canadians right now are holding it up against him because they don't know all the ins and outs to make up their own mind."

In a question about which party leader would make the best prime minister, Trudeau got the backing of 26 per cent of respondents, down seven points from a similar poll Leger conducted in November 2018.

Conservative Leader Andrew Scheer received 21 per cent support, down one point from November. Green Leader Elizabeth May drew eight per cent and New Democratic Party Leader Jagmeet Singh got six. Maxime Bernier of the People's Party of Canada, a former Conservative, was the choice of four per cent of respondents.

Trudeau has faced repeated questions since the Globe and Mail published a story that former justice minister Jody Wilson-Raybould was pressured by staff in the Prime Minister's Office to help SNC-Lavalin, the Montreal engineering giant, avoid a criminal case on corruption charges related to government contracts in Libya.

The poll was conducted after Wilson-Raybould resigned from the cabinet but mostly before Butts quit the Prime Minister's Office on Feb. 18.

Leger's internet-based survey was done using computer-assisted web interviewing technology from Feb. 15 to Feb. 19. It heard from 1,529 Canadian adults who are eligible to vote and were randomly recruited from the firm's online panel. The results were weighted to reflect age, gender, mother tongue, region and level of education so the results reflected the makeup of the Canadian population.

In the survey, respondents were asked whether they had heard, read or seen anything about Trudeau's having "perhaps pressed Ms. Wilson-Raybould to abandon a criminal case involving SNC-Lavalin."

A majority said they had heard about it but 46 per cent said they knew little about the story.

Another 20 per cent responded they knew the issue well; 24 per cent said they had not heard about it and nine per cent did not know or refused to reply.

Bourque also said the firm's polling in February is the first time since the 2015 election that the Conservatives have been ahead of the Liberals in overall support.

Bourque finds it interesting that Scheer is not picking up the slack, he said.

"There's nobody right now that's capturing the minds and hearts of Canadians and probably explains why voting intentions are so close while we see that the prime minister is actually showing signs of weakening in terms of support," he said.