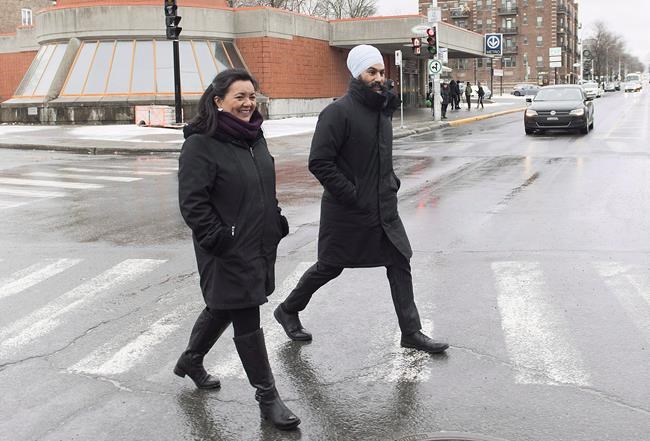 MONTREAL — Julia Sanchez, the NDP's candidate in Monday's Outremont byelection, says people in the riding talk to her about climate change, wealth inequality — and sometimes what the leader of her party wears on his head.

NDP Leader Jagmeet Singh is Sikh and wears a turban, making him conspicuously religious in front of a heavily secular province. His French is also weaker than the two previous party leaders, complicating the job of appealing to Quebec voters.

Even in multicultural Outremont, located in the geographic centre of the island of Montreal with one of the largest ultra-Orthodox Jewish communities in North America, Singh's religious clothing is on some voters' minds.

"Some people are concerned about (the turban)," Sanchez said during a recent interview following a candidate debate in the riding. She said when she knocks on doors, "It's definitely not the main thing people bring up .... It does come up."

Kathryn Furlong, 43, who attended the debate, said she voted for Sanchez, an economist with experience in humanitarian work and climate activism, at an advance poll. She has voted Liberal in the past "but never by conviction. Sometimes to keep the out the Conservatives."

She said "it's a sad notion and a sad question," referring to anyone who would have an issue with the NDP leader's expression of faith. "And I think political parties in Quebec try to exploit that issue."

Outremont has been represented by the NDP since former party leader Tom Mulcair won a 2007 federal byelection in what had long been a Liberal stronghold. Through the rise and fall of NDP popularity in Quebec, voters elected Mulcair another three times.

Mulcair stepped down last August and is now a visiting professor at Universite de Montreal and a political commentator. The NDP is currently polling fourth in Quebec, far from its highs when Jack Layton helped the party win the majority of the province's seats in 2011.

McGill University philosopher Charles Taylor, a longtime NDP supporter who campaigned with Sanchez ahead of the byelection, said the cool reception Singh has so far received in Quebec is due to the fact he doesn't yet have a seat in Parliament. Singh is his party's candidate in one of the other two byelections Monday, in the British Columbia riding of Burnaby South.

Once he gets inside the House of Commons and is regularly in front of the cameras, Taylor predicted, "Quebecers will learn to like him. He's very engaging, but he's just not on television all the time."

The Coalition Avenir Quebec won last fall's provincial election with a promise to prohibit some public servants, including teachers, from wearing religious symbols on the job. But Taylor said Singh is "going to make a case for: 'You can wear this kind of thing and be a perfectly reasonable person.' And that's something that Quebecers are able to listen to."

While an NDP loss Monday would further hurt the party in the province, Justin Trudeau's Liberals arguably have more at stake.

The party has 39 seats in Quebec leading into Monday's vote and 179 nationally. Polling indicates Liberal support has declined across the country since the 2015 vote, and Trudeau is looking to pick up seats in Quebec to maintain his party's majority in next fall's general election.

Outremont  — where 36 per cent of residents are immigrants and 66 per cent are bilingual — is the kind of riding the Liberals must connect with in order to maintain their success in Quebec.

Rachel Bendayan, a lawyer and former political aide, finished second to Mulcair in 2015. Her party has consistently led polls in the province since the last election. But in recent weeks it has been embroiled in controversy over allegations that the Prime Minister's Office improperly pressured former justice minister Jody Wilson-Raybould to help engineering giant SNC-Lavalin escape criminal prosecution.

The Montreal-based company is charged with bribery and fraud over its dealings in Libya, and it has said a conviction could lead to job losses and make it vulnerable to foreign takeover.

Bendayan said it is journalists, not the people she meets when knocking on doors in the riding, who are asking about SNC-Lavalin. "No, people are not raising it," she said in a recent interview recently at her campaign office. "People here are concerned with issues that affect their day-to-day lives. You'd be surprised how many people talk to me about the ice on the sidewalks."

Tom Boushel, 72, a Liberal volunteer who will be driving seniors to vote on Monday, said he doesn't think the SNC-Lavalin issue will have as much of an impact in Quebec as elsewhere. "Quebecers are sensitive to the risk of job losses," Boushel said, adding that Montrealers appreciate the prestige of having a global firm headquartered in their city.

Boushel said "every elected official of every party ... every government has to fight to keep SNC going. I think in Quebec, I think they understand a little better."

The byelection is the first test for the Bloc Quebecois under its new leader, Yves-Francois Blanchet, who was acclaimed in January. The Bloc is hoping its candidate, author Michel Duchesne, will help the party become competitive once again in the riding.

Jasmine Louras, a University of Ottawa law student, is representing the Conservatives, while James Seale, a veteran of the Canadian Armed Forces, is running for the People’s Party of Canada, the party Maxime Bernier started after he quit the Conservatives last summer.