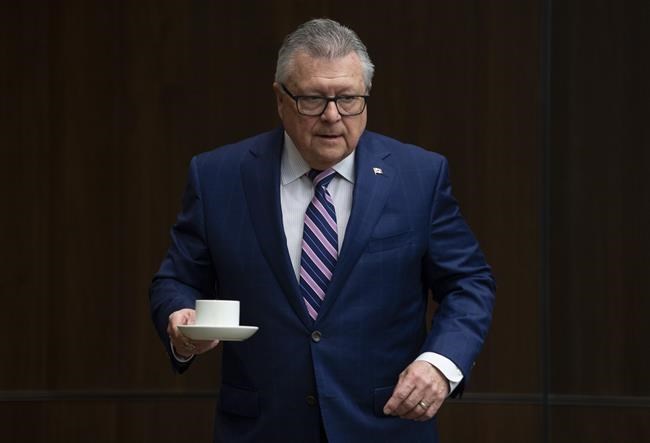 OTTAWA — Public Safety Minister Ralph Goodale says the government will soon bring in legislation to provide pardons for anyone convicted of pot possession before the drug's legalization last year.

Goodale said on Twitter he is going to put the House of Commons on notice that a bill will soon be introduced to provide "no-cost, expedited pardons for simple possession of cannabis."

The notice is a procedural requirement for the government to introduce new legislation.

The details of the bill won't be revealed until the legislation is officially presented to the House of Commons, which could occur as early as the end of this week.

But the Liberals have already telegraphed what they plan do.

In October, Goodale said the legislation would waive the application fee and five-year waiting period for Canadians seeking pardons for possessing up to 30 grams of marijuana — an offence that was punishable with a fine of up to $1,000 and six months in jail.

But he dismissed at the time the idea of expunging criminal records, even though the Liberals legalized recreational cannabis use, because expungement was reserved for cases of past injustice involving charter rights violations.

A pardon, or record suspension, means a person's criminal record is separated from other records and is only disclosed in limited circumstances.

So while a pardon doesn't erase a record completely, it can make it easier to get a job or travel.

In December, the Commons began debating a private member's bill from NDP MP Murray Rankin that would expunge criminal records for what he said were 500,000 Canadians with convictions for simple possession.

He warned that without help from the Liberals, his bill likely wouldn't pass all the legislative hurdles to become law before this fall's election.

"I would urge the Liberals to work with my bill and make it better so we can get on with the task that should have been commenced when we brought in legalization in the first place," Rankin said during debate.