Scheer calls on Trudeau to resign, Singh for inquiry over SNC-Lavalin affair 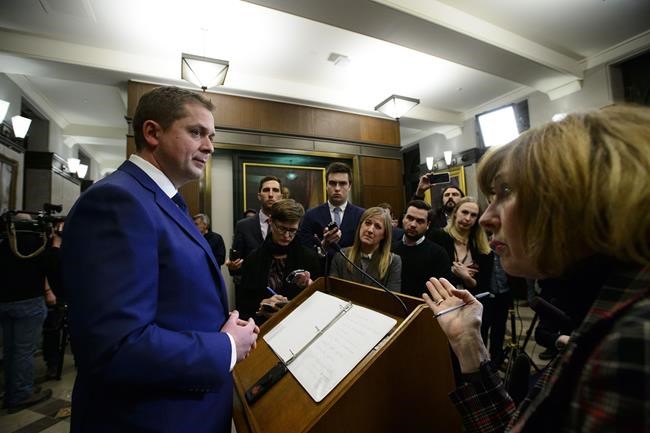 Scheer threw down the gauntlet immediately after a three-hour Commons' justice committee meeting in which Wilson-Raybould said she felt pressure from Trudeau and others to head off a criminal prosecution of Montreal engineering firm SNC-Lavalin.

"Justin Trudeau simply cannot continue to govern this country now that Canadians know what he has done," Scheer said. "And that is why I am calling on Mr. Trudeau to do the right thing and to resign."

But Trudeau quickly rebuffed Scheer's demand as he touted his government's record defending jobs and "the independence of our judiciary," adding Canadians will decide later this year whether to re-elect the Liberals or hand power to the Conservatives.

The back-and-forth marked the latest escalation in what has already been the most explosive political challenge facing the Trudeau government during its more than three years in power. The Official Opposition very rarely calls on a prime minister to resign.

NDP Leader Jagmeet Singh said Wilson-Raybould's testimony underscored his party's calls for an independent inquiry to find out the truth of what happened between the former attorney general and members of Trudeau's inner circle.

During her testimony, Wilson-Raybould told the committee that she withstood four months of relentless pressure to reverse a decision not to make a plea-bargain-type deal with SNC-Lavalin. She said the pressure came from Trudeau and other senior Liberal officials.

Wilson-Raybould told the committee that she believed the pressure, which also included "veiled threats" from the country's top civil servant, Privy Council clerk Michael Wernick, was inappropriate. But she added she did not think it was illegal.

Scheer nonetheless demanded Trudeau's resignation and called for the RCMP to launch a criminal investigation into what the Liberal government did to help SNC-Lavalin, which is facing criminal charges related to allegedly corrupt dealings in Libya.

"Jody Wilson-Raybould tells the story of a prime minister who has lost the moral authority to govern," Scheer said.

The Conservative leader also called for Wernick to resign and encouraged the Liberal cabinet, which is scheduled to present a federal budget next month, to find a way to govern the country in a non-partisan way without the prime minister.

Scheer did not say what he would do if Trudeau refused to resign, such as calling a non-confidence vote.

For his part, Singh said Wilson-Raybould's testimony painted a picture of a prime minister and other members of government who were willing to disregard the rule of law and were more interested in helping powerful friends than average Canadians.

While the NDP leader said Trudeau and others may eventually have to step down, he said that determination should come after a public inquiry is held to get the bottom of what really happened.

Trudeau, however, indicated during a Liberal party event in Montreal a short time later that he had no intention of resigning. He rejected Wilson-Raybould's version of events, saying he and his staff "always acted appropriately and professionally."

He said Canadians will have "a very clear choice in a few months" in the October election about who they want to form government.

"There will be a clear choice to be made between the Liberal Party, this government that ... has consistently stood up for Canadian jobs, consistently defended Canadian jobs while defending our institutions and the independence of our judiciary," he said.

"And on the other hand there is a choice of the party that is still very much the party of Stephen Harper. That continues to attack, to divide, to play politics with big issues and (thinks) the best way to create economic growth is still to give advantages to the wealthiest."