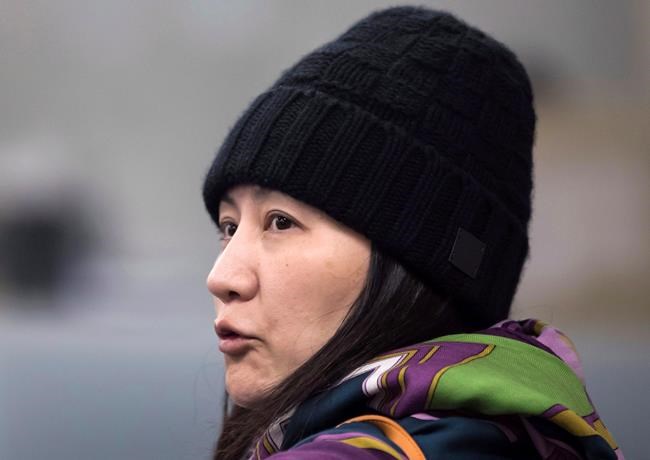 OTTAWA — The federal Justice Department gave the go-ahead Friday for an extradition case against Huawei executive Meng Wanzhou, marking the formal start of the high-profile process that has put Canada in a deeply uncomfortable position between two superpowers.

Canada's relationship with China — its second-biggest trading partner — has deteriorated since Meng's December arrest in Vancouver.

The arrest of the Chinese telecom giant's chief financial officer has angered Beijing, which has warned Ottawa of serious consequences unless she is released.

China has criticized Canada for acting on what it sees as a politically motivated extradition request from the Americans, particularly after U.S. President Donald Trump publicly contemplated intervening in Meng's case in the interests of securing a better trade deal with China.

Throughout, Prime Minister Justin Trudeau has maintained Canada is simply following the rule of law.

The government news release Friday announcing the decision appeared to take into consideration the deeply sensitive nature of Meng's case and the allegations of political interference that surround it. The first line in the release declares: "Canada is a country governed by the rule of law."

It goes on to say the decision follows a "thorough and diligent review" of the evidence in this case.

Ultimately, Justice Minister David Lametti must decide whether Meng is extradited, which is why his department said he will not comment on the facts of the case.

It heads back to the British Columbia Supreme Court on Wednesday.

The extradition hearing won't render a verdict of guilt or innocence. If Meng is eventually extradited, her actual trial will take place in the United States.

Following Friday's decision, Meng's defence team said it's disappointed Lametti let the process proceeding "in the face of the political nature of the U.S. charges and where the president of the United States has repeatedly stated that he would interfere in Ms. Meng's case if he thought it would assist the U.S. negotiations with China over a trade deal."

The statement, signed by David J. Martin, continued by saying the defence is also concerned the minister gave his approval even though the acts the U.S. wants to try Meng for would not be an offence in Canada.

"Our client maintains that she is innocent of any wrongdoing and that the U.S. prosecution and extradition constitutes an abuse of the processes of law."

The U.S. Department of Justice has laid out 13 criminal counts of conspiracy, fraud and obstruction against Huawei and Meng, who is the daughter of company founder Ren Zhengfei.

The Chinese Embassy in Ottawa said it is "utterly dissatisfied" with Friday's decision, calling her case "a political persecution against a Chinese high-tech enterprise."

"The subsequent developments have proved this," the embassy said in a statement. "The so-called 'rule of law' and 'judicial independence' asserted by Canada cannot cover up the mistakes made by the Canadian side on the case of Meng Wanzhou."

Allegations levelled against Trudeau and top officials of interfering in the prosecution of engineering firm SNC-Lavalin have caught the attention of the Chinese government.

Trudeau and other senior Liberals have denied anyone applied inappropriate pressure on Wilson-Raybould.

A spokesman for China's foreign ministry told reporters in Beijing that there is a lot of interest in China in how the Canadian government responds to the allegations.

Lu Kang made the comments after being asked whether he thought the Trudeau government was taking an inconsistent approach in the cases of Meng and SNC-Lavalin.

On Thursday, Foreign Affairs Minister Chrystia Freeland insisted in an interview that Ottawa's handling of the Meng case has been "scrupulous."

In the days following Meng's arrest, China arrested two Canadians in moves Western analysts interpret as attempts to pressure Canada into releasing her.

China detained Michael Kovrig, a Canadian diplomat on leave, and Michael Spavor, an entrepreneur, on allegations of engaging in activities that have endangered China's national security. They remain in Chinese custody.

China also sentenced another Canadian, Robert Lloyd Schellenberg, to death in a sudden retrial of his drug-smuggling case.

—With files from Mike Blanchfield