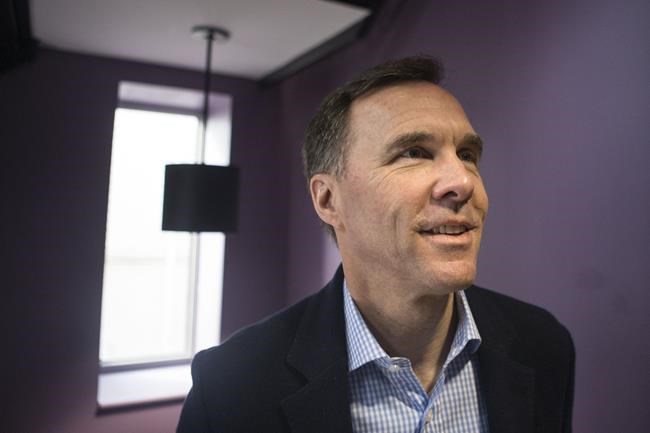 OTTAWA — The Trudeau government is due to deliver an update to its plan to support journalism in next week's budget but Ottawa's recent silence on the file has stoked concerns in the media industry that a lifeline is taking too long to arrive.

Last fall, the federal Liberals announced new tax credits and incentives, worth $595 million over the next five years, to support the struggling news industry.

Finance Minister Bill Morneau argued at the time that strong journalism was essential for a healthy democracy and said more details would be in the federal budget.

But while the industry applauded the plan, the strategy was immediately met with criticism when it was sketched out in November's fall economic statement.

Conservatives accused the government of trying to buy journalists ahead of the October election, with one MP suggesting the package could be a slush fund to pay for a "gigantic propaganda machine" for the Liberals. Some journalists have warned the aid package could erode the independence and credibility of the press.

The stated aim is for the program to be funded by the government but have no place for politicians to decide what constitutes a media outlet or who would be eligible. Ottawa hopes this approach will avoid the appearance of conflict between a free press and government influence.

Moving forward with the plan, however, promises to be politically delicate with only seven months to go before the election.

In November, Ottawa said it would create an independent panel of experts from the journalism community to seek advice on the measures and, in particular, define which outlets will be eligible for a refundable tax credit on labour costs.

But the government has yet to set up the panel. Industry representatives say there were some good meetings with federal officials after the announcement before the interactions abruptly stopped.

John Hinds, the CEO of News Media Canada, said the "clock is ticking."

"We've found that there hasn't been a lot of back and forth ... That's a bit anxiety-producing for everybody," Hinds, whose association represents over 800 news publications, said Friday in an interview. "We're well into the business planning for the year and without certainty it doesn't help ... A lot of publications, whether they're large or small, are pretty precarious right now."

The scope and criteria for a tax credit on labour costs need to be defined quickly to allow outlets to make business decisions, he said. The tax credit, which Hinds hopes will cover 30 to 35 per cent of newsroom staffing costs, will be retroactive to Jan. 1.

The package also includes a temporary, non-refundable tax credit for subscribers to digital news sites and a model to allow non-profit media organizations to apply for charitable status, enabling them to seek donations for which they could issue tax receipts.

Edward Greenspon, a former journalist who is now president of the Public Policy Forum think-tank, said he will be interested to see if the government is only pushing ahead with some parts of its package, or if it's decided the pre-election period isn't the best time for it.

The Public Policy Forum has published a major report with recommendations on how the government can take on the complex challenge of helping the news industry without interfering with journalism.

Greenspon said with so little activity in recent weeks there's a sense the process is behind schedule.

"Are they going to get as far advanced on the road as I was hoping they would be? I suspect not. I will be watching with interest," Greenspon said in an interview. "If they go ahead with this, they'll have journalists who are opposed and opposition parties who are opposed screaming at them. If they don't go ahead, they're likely to have the publishers, who heard a promise, screaming at them."

Simon Ross, a spokesman for Heritage Minister Pablo Rodriguez, said Friday that Canadians should expect next week's budget to lay out details of the measures announced in the fall economic statement.