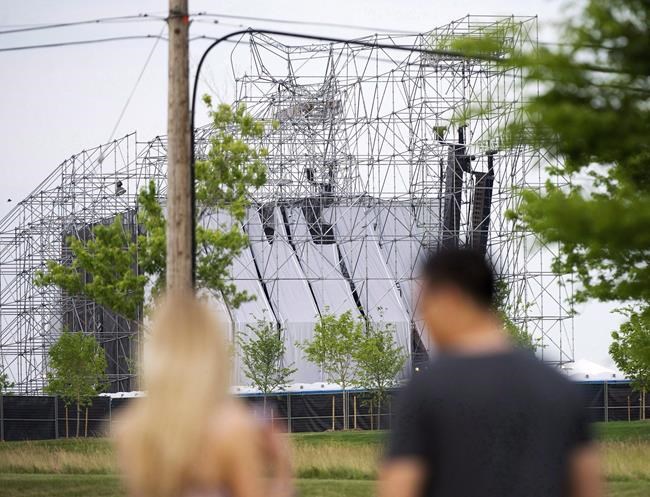 TORONTO — The Ontario government should form a working group to examine the processes involved in the live performance industry, including the construction of temporary stages like the one that fatally crushed a drum technician before a Radiohead show nearly seven years ago, a lawyer told a coroner's inquest Tuesday.

Lawyers made their closing submissions at the inquest into the death of Scott Johnson, with the coroner's counsel laying out a list of 25 proposed recommendations for jurors to consider including in their verdict.

Among them are recommendations for the provincial and federal governments, the engineering industry, and various members of the entertainment industry, including promoters and venue operators.

They include creating a permanent working group to address the concerns raised during the inquest, such as the need for consistent design drawings, the need to have a trained supervisor on site at all times during construction and for a prohibition on having people on stage while work is happening overhead unless safety measures are in place.

The group should involve experts from the live entertainment and staging industries as well as Johnson's father, Ken Johnson, who is also a scaffolding expert in the United Kingdom, coroner's counsel Prabhu Rajan said in his submissions.

"Scott's death was preventable," and the inquest provides an opportunity to improve conditions for others in the industry, Rajan said.

Jurors are not required to adopt the proposed recommendations or make any recommendations at all as part of their verdict, said the presiding coroner, Dr. David Cameron. They are also not to assign blame for Scott Johnson’s death but rather examine the circumstances that led to it.

Johnson was killed when the stage roof came crashing down hours before Radiohead was set to play at Toronto's Downsview Park on June 16, 2012.

Charges were laid under the Occupational Health and Safety Act against the show's promoter, Live Nation, contractor Optex Staging and Domenic Cugliari, the engineer who signed off on the stage plans. They were later stayed because the matter took too long to get to trial.

Johnson's family and friends have expressed disappointment and frustration with the justice system over the outcome of the case, as has Radiohead. They have decried the lack of accountability in the incident that claimed the life of the promising music professional.

"We're hopeful that this proceeding has given you some answers," Rajan said in his closing arguments.

The lawyer representing Live Nation said more has been revealed about what caused the collapse through the inquest than in the roughly nine weeks of court proceedings, likely because witnesses are being more forthcoming "without charges hanging over everybody’s head."

"You might just ensure that another Scott Johnson lives to a ripe old age," Jack Siegel told the jury.

The inquest has heard the plans for the stage were riddled with mistakes, the wrong building components were used in key areas and the construction was running behind schedule.

Cugliari, the engineer, testified he did not check the right parts were being used because he trusted the contractor.

There was also no independent oversight of the construction plans or process because the show was to take place on federal land, meaning there was no requirement to apply for a building permit, the inquest has heard.

Other recommendations proposed by the coroner's counsel include changes to the building code as it relates to temporary stages, and amendments to occupational health and safety laws that would require such structures to be inspected by an engineer.

An engineer should also be present throughout the construction process, the proposal said.

The association representing the province's engineers, Professional Engineers Ontario, should also ensure its guidelines specify the need for clear and consistent design plans, a checklist of components to be used and a joint review of what's to be done before construction begins, according to the proposal.

A lawyer representing the association said given the organization's governance structure, it could not guarantee the adoption of any particular recommendations made by the inquest jury.