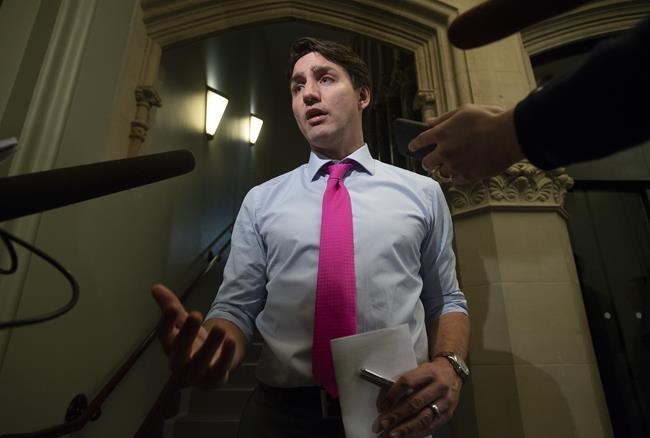 The changes would prevent asylum-seekers from making refugee claims in Canada if they have made similar claims in certain other countries, including the United States, a move Border Security Minister Bill Blair says is aimed at preventing "asylum-shopping."

Lawyers and advocates who work with refugees are sounding the alarm about the legal changes, saying they would strip human-rights protections from vulnerable asylum-seekers.

Trudeau said Wednesday that Canada has been seeing larger numbers of refugee claims because of global instability. Sustaining Canadians' confidence in the country's asylum system means ensuring those who enter Canada do so according to the law, he said.

"That's why we're putting more resources in, and we're also ensuring the system is fair for everyone," he told reporters on Parliament Hill.

More than 41,000 asylum-seekers have crossed into Canada "irregularly" through unofficial paths across the Canada-U.S. border since early 2017. By doing so, they take advantage of a loophole in Canada's "Safe Third Country Agreement" with the United States that allows refugees who find a way into Canada by avoiding official border checkpoints to make refugee claims. The agreement would otherwise see them turned back to the U.S. — a country Canada considers safe for them.

The influx of irregular migrants began after U.S. President Donald Trump announced he would end a program that offers temporary protected status to migrants from several countries, serving notice he would seek to return them to homelands the United States had previously considered too dangerous. It has become a difficult political issue for the Trudeau government as hundreds of migrants continue to arrive in Canada through one particular unofficial crossing in Quebec each month.

Conservative Leader Andrew Scheer blames Canada's border woes on Trudeau, based on a tweet he issued in 2017 in which he welcomed refugees to Canada. Given the timing, it appeared to be a response to Trump's changes to the U.S. rules on temporary protected status there.

But Scheer on Wednesday sidestepped questions about the changes to refugee eligibility proposed by the Liberals, focusing instead on his own party's belief in an immigration system that is "fair, orderly and compassionate."

"We have to have a system that prioritizes those fleeing danger, fleeing civil war and natural disasters and that has to be based on our borders having integrity," he said.

"Our proposed changes include measures to deter irregular migration and maintain the integrity of our asylum system by preventing access to those who make repeated claims in different countries," she said. "This encourages those who truly need protection to seek asylum at the first possible opportunity, while those who do not need to follow the rules."

Government figures show that since April 1, 2017, roughly 3,150 asylum-claimants in Canada had previously applied for asylum in the United States. Three-quarters of them were irregular migrants — fewer than six per cent of the total number of irregular asylum-seekers to arrive in Canada since 2017. The vast majority of them had made their claims to the U.S. between one and five years ago, according to government data.

The Liberals signalled their intent to get tougher on the border in the 2019 budget, which included a plan to spend $1.18 billion over five years to beef up security and law enforcement and speed up the processing of asylum claims.

Finance Minister Bill Morneau said Canada wants to maintain its reputation as a fair and welcoming country, but also one that is governed by the rule of law.

"Every single person who comes to Canada — whether it's regularly or irregularly — goes through our immigration system, gets the full treatment within our asylum system."

But refugee advocates and lawyers say disallowing asylum seekers who have made refugee claims in other countries from making claims in Canada does just the opposite, stripping them of their ability to plead their cases to the Immigration and Refugee Board.

NDP immigration critic Jenny Kwan is particularly concerned that migrants to Canada wouldn't be permitted to make claims in Canada after having had their claims rejected in the United States.

She is concerned for those who might be rejected as a result of a shift in U.S. immigration policy last year. The new rules say domestic and gang violence can no longer be used as grounds for asylum in the United States.

"The Trump government has demonized immigrants and asylum-seekers, they have removed gender-based violence and gang violence as grounds for making an asylum claim, they have taken (migrant) children from their parents ... for Canada to take a page out of that with this measure is shocking to me," the Vancouver MP said.

Kwan also raised the case of Seidu Mohammed — a man from Ghana who lost all his fingers to frostbite after crossing irregularly into Manitoba from the U.S. in December 2016. Both Mohammed and the man he was travelling with, Razak Iyal (who also lost digits to frostbite) had previously had their asylum claims rejected in America before coming to Canada.

Both of their claims for refugee protection were eventually accepted in Canada.

"If this law that's being proposed in the budget bill was in place, Mr. Seidu would be sent back. This is the real ramification for people and Canada is knowingly embarking on this path," Kwan said.

Both she and Green Leader Elizabeth May have asked House of Commons Speaker Geoff Regan to break up the budget bill to separate out these and other non-budgetary measures, arguing they should be treated separately as notable changes in public policy. Regan is considering the request.