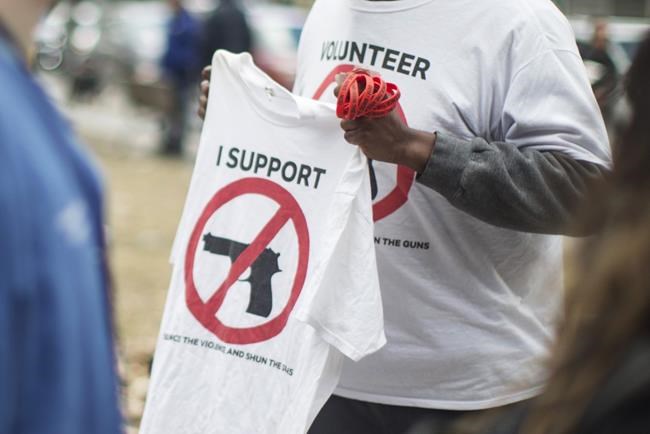 The federal report released Thursday says opinions expressed during in-person discussions and through written submissions both opposed and supported outlawing handguns and assault-style firearms. In contrast, most people who responded to a questionnaire were against a ban.

Many participants felt strongly that a ban would target law-abiding owners, rather than illicit firearms, and would not reduce gang violence, the report says. As a result, many called for beefing up police and border services, as well as tougher penalties for firearms-trafficking and gun-related crime.

"A wide range of approaches and ideas were discussed, which suggests that a multifaceted approach is needed to address this issue rather than implementing a ban in isolation," the report says.

There was consensus on the need to address the underlying social conditions that can lead to gun violence, such as poverty, lack of education and employment opportunities, poor mental-health supports and social isolation, the report adds.

Participants also supported better collection and sharing of data on gun crime, especially on sources of illicit firearms and the types of offences being committed.

In addition, many people active in the firearms community said they wanted to work with the federal government to come up with solutions.

Blair said Thursday there are "opportunities to take measures that will make Canada safer," though he declined to provide details or speculate on timing.

Blair said he has been looking at the data, the experience in other jurisdictions, Canada's regulatory environment and how firearms get into the wrong hands. "And as a result of that work, I believe that there are some things that we can do to create a safe environment, reduce gun violence in our communities and make it far more difficult for people who would commit crimes."

Participants at a series of eight in-person roundtables in Vancouver, Montreal, Toronto and Moncton, N.B., last October "were divided in their views on a ban," the summary says.

There was also a range of opinion among 36 written submissions. Opposition to a ban came from shooting clubs, retailers, academics, wildlife associations, a territorial government, an association representing rural municipalities and a group of LGBTQ firearms owners.

"You are reacting to a crime wave, no question, but not a firearms problem," said one submission.

Support for a ban came from some health associations, victims' organizations, women-focused groups, a provincial ministry and an organization that deals with municipal affairs.

"As these firearms have no legitimate use in hunting, current owners may only legally use them for target shooting or collecting," said one such submission. "This is not a compelling enough reason to justify the risk they pose to public safety."

However, about four in every five of the almost 135,000 responses to an online questionnaire objected to doing more to limit access to handguns or assault-style weapons.

A federal bill introduced in March last year, and currently before the Senate, has proposed expanding the scope of background checks on those who want to acquire guns, strengthening record-keeping requirements for sales and requiring purchasers to present valid firearms licences.

But the government has long been eyeing additional measures.

The government thinking evolved further after a July 2018 shooting in Toronto that killed two people, injured 13, led to the gunman's death and left a neighbourhood deeply shaken.

Two days later, Toronto city council passed a motion calling on the federal government to outlaw the sale of handguns in the city.